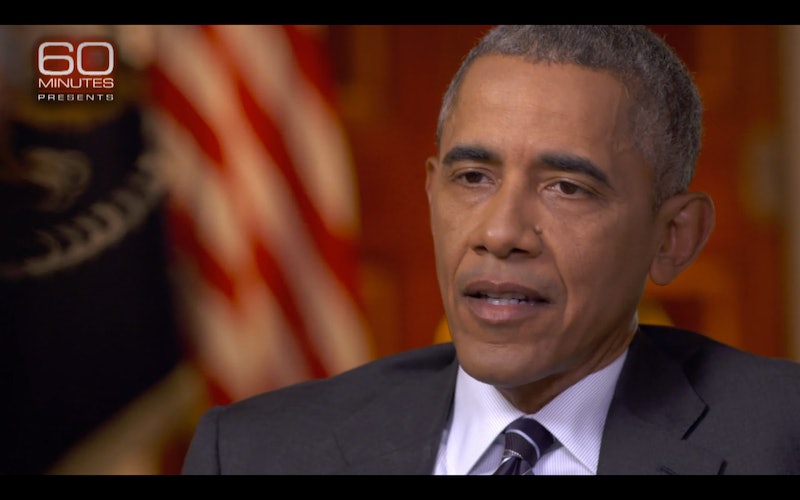 In an interview with CBS' Steve Kroft on Sunday, President Obama discussed his experiences as president, the state of American politics, and the shape of things to come. He also gave his thoughts on the President-elect, and Obama's closing advice on Trump during 60 Minutes is something the country cannot afford to forget once the real-estate magnate takes office.

"Don't underestimate the guy, because he's gonna be the 45th President of the United States," Obama told Steve Kroft. "The one thing I've said to him directly, and I would advise my Republican friends in Congress, and supporters around the country, is, just make sure that as we go forward, certain norms, certain certain institutional traditions, don't get eroded. Because there's a reason they're in place."

The first part of that statement is a pretty explicit warning. The second part of explains the reasoning behind the warning.

It goes without saying that Trump was perpetually underestimated throughout the presidential campaign — by Democrats, Republicans, voters, pollsters, and just about everybody else. More importantly, this underestimation is a large part of why he was able to win. Had Marco Rubio, Jeb Bush, and Ted Cruz spent more time attacking Trump and less time attacking each other during the Republican primary, for instance, it's quite possible that Trump wouldn't have become the nominee in the first place.

With the second part of his statement, Obama was, in a somewhat understated manner, warning of what might happen if America continues to underestimate Trump. Obama didn't explicitly say what he was referring to when he said Americans must ensure that "certain norms, certain institutional traditions don't get eroded" under Trump. But given the number of norms and institutions Trump has explicitly or implicitly threatened, it's not hard to come up with some possibilities.

Perhaps Obama was referring to Trump's attacks on the free press. I'm not talking the insults he's hurled at individual journalists or media outlets; I mean the very concept of a free press itself. During the campaign Trump said that he wants to place limits on what the media is legally allowed to publish, and more recently, his team suggested that he may kick the press out of the White House entirely.

Or maybe Obama was referring to Trump's disdain for America's democratic norms. Back when it looked like he was going to lose the election, Trump refused on multiple occasions to say whether or not he'd accept the results if he lost. Even at the time, that was unprecedented, as it amounted to a rejection of (or at least a refusal to accept) the peaceful transfer of power that forms the cornerstone of democratic rule. It will be exponentially more terrifying if in four years, President Trump refuses to accept the results of his reelection if he loses.

Obama could have been referring to any number of other norms: Congressional approval of treaties, abidance of Supreme Court decisions, the very notion of checks and balances. All of those must be protected vigorously once Trump takes office, as there's no telling which he will threaten next. And that's why, as Obama said in the closing days of his presidency, that we can't underestimate Trump.