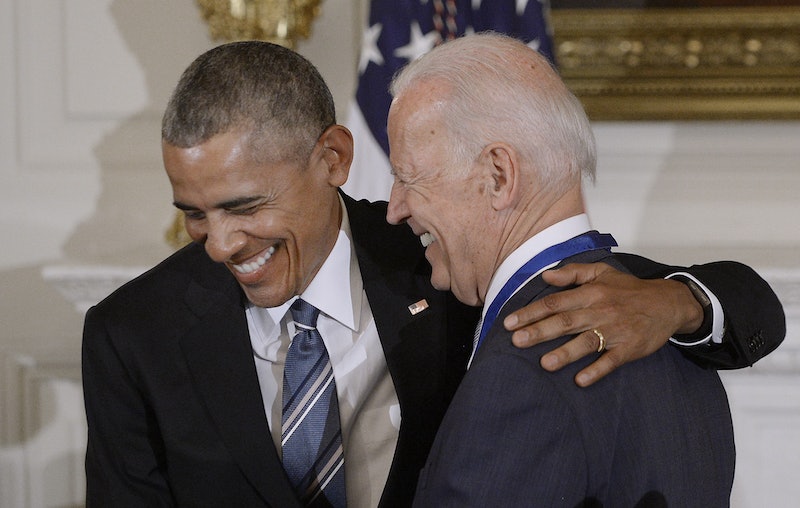 After eight years in the White House as President Barack Obama's vice president, Joe Biden certainly has experience that no one else in the crowded Democratic primary field can boast. He also has a deep connection to the former president, as everyone knows from all of the Obama-Biden bromance memes. According to Politico, though, this didn't translate into an immediate endorsement from his old colleague. Obama commented on Biden's 2020 presidential bid, but didn't endorse his former vice president — which, as Biden told reporters, was exactly what he asked for.

“President Obama has long said that selecting Joe Biden as his running mate in 2008 was one of the best decisions he ever made,” an Obama spokesperson told Politico. “He relied on the vice president’s knowledge, insight and judgment throughout both campaigns and the entire presidency. The two forged a special bond over the last 10 years and remain close today.”

Observers quickly noted that this did not amount to an explicit endorsement, but Biden made it clear that he had asked Obama not to endorse him, as New York Times reporter Shane Goldmacher tweeted. Free Beacon editor David Rutz then added on Twitter that Biden made that request so that he could make his case for himself, according to his campaign manager.

Based on what those close to Obama have said previously about a potential 2020 primary endorsement from the former president, though, it would have been a much bigger surprise for him to endorse Biden than not.

According to Time, Obama had a reason for the decision not to make an endorsement that he pulled from his own experience: He didn't want to give anyone an upper hand in the primary, because he believed that campaigning in the primary against Hillary Clinton made him a stronger candidate in the general election. He hasn't completely stayed out of the way, though, according to The New York Times. He's offered advice to and met with numerous candidates either after they declared or as they weighed a run.

“President Obama counsels candidates to always show up and make their case even in areas or in front of audiences they may not necessarily win; express views and positions that reflect their genuine beliefs; and share a positive vision for the country true to their own personal story,” Obama senior adviser Eric Schultz told The New York Times.

But while Biden might not have wanted Obama's endorsement, he's also certainly not backing down from using his White House experience. His campaign Instagram already features pictures of him with Obama, and as Politico noted, he's referred to himself as "an Obama-Biden Democrat."

Republican officials have also begun using Obama's non-endorsement of his former vice president as a smear against Biden.

“We don’t need eight more years of Biden. Just ask President Obama, who isn’t even endorsing his right-hand man,” an RNC spokesman said, according to CNBC.

Based on the claims from both the Obama and Biden camps, though, it seems pretty clear that this isn't a slight toward Biden.