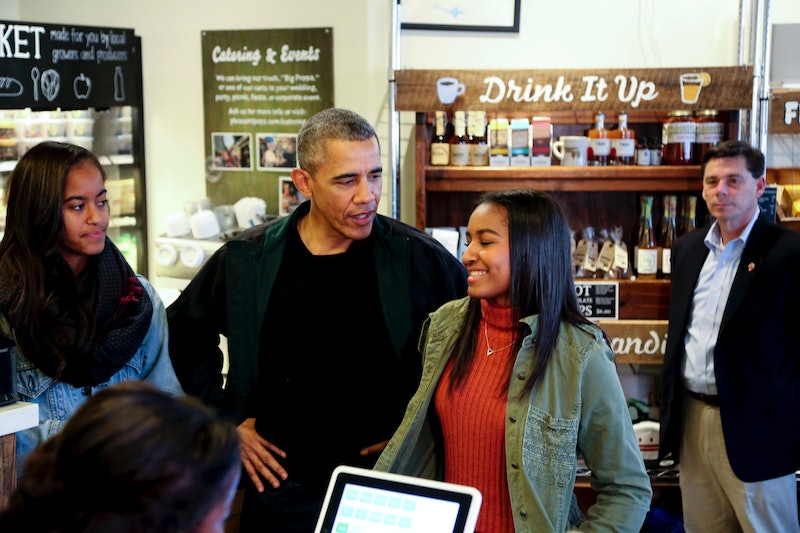 Traveling solo can be fun, but for many parents, going on a trip with their kids is a great source of joy and fulfillment. During an appearance at the World Travel and Tourism Council Global Summit in Spain this past week, Barack Obama explained why traveling with Sasha and Malia was so enjoyable, according to SFGate.com.

The former president told the CEO of Hilton, Christopher Nassetta, that it was "spectacular" to visit other countries on his own. But Obama added that it was "more special than anything else" to see Sasha and Malia experience the thrill and amazement that comes with traveling around the world.

"The most memorable trips that I’ve taken have been the ones with [Sasha and Malia]," Obama said, according to SFGate.com. "Some of them have been spectacular. Like walking through the Kremlin when I was president. Sasha at 7 years old [and] had on a trench coat so she looked like an international spy."

"That was a great trip because the we went from Russia to Italy," Obama told Nassetta. "I was there for the G20 but they went to Rome and they were able to meet the pope. Then we went to Ghana, and there was dancing on the tarmac." In typical dad fashion, Obama also joked that he could still get Sasha and Malia — who are 17 and 20, respectively — to travel with him "because they [otherwise] can’t afford it."

The former first couple has spoken candidly about their experience with parenting before. In March, during an interview on comedian Conan O'Brien's podcast, Michelle Obama talked about the challenges of raising Sasha and Malia in the White House. "I am in awe of my children for the way they have managed this whole thing with poise and grace," she told O'Brien. "There's a resilience that they've had to develop."

Per SFGate.com, Obama also mentioned to Nassetta that the younger generation, including Sasha and Malia, was more informed about traveling than previous generations thanks to their smartphones. "They can now consume the entire world on this small device [their mobile phones]," Obama said, SFGate.com reported.

On the broader topic of traveling, Obama told Nassetta that he believed visiting different countries and witnessing other cultures was important to expand one's mind. "Travel also reminds us of what we share and what we have in common and what things we share with each other," Obama said to Nassetta, according to SFGate.com.

The former president gave an example of going through a Kenyan village and seeing a mother and baby play. "You realize it's not that much different than a mother and child in Hawaii or Virginia," he told Nassetta.

It certainly seems like Obama believes in the power and impact of travel on a person's worldview. He told Nassetta about visiting Barcelona, Spain, and watching the sun rise. "Those kinds of trips are memorable," Obama said, "because they are part of you as a young person trying to discover what your place in the world is."