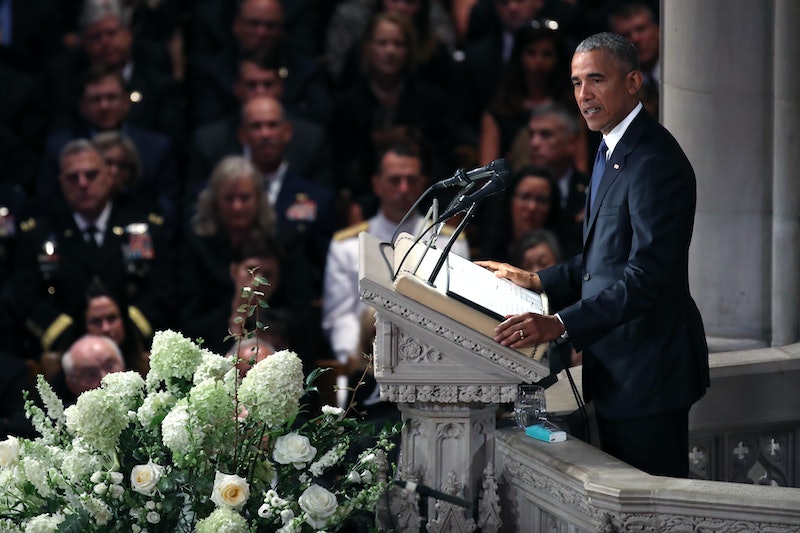 At the Washington National Cathedral on Saturday, former President Barack Obama eulogized Sen. John McCain and his public service, while also subtly listing all the ways McCain resisted President Donald Trump. "So much of our politics... can seem small and mean and petty, trafficking in bombast and insult, in phony controversies. John called on us to be bigger than that," Obama told the packed audience at the Washington National Cathedral. "He called on us to be better than that.”

Obama also spoke about how the two men bonded through private conversations at the White House after the contentious 2008 presidential campaign.

Obama then took another subtle swipe at Trump. He said of McCain:

Though Trump did not attend McCain's invitation-only service, his daughter Ivanka Trump and son-in-law Jared Kushner were present.

He added that public service "is demanded of all of us as citizens of this great republic."

The way Obama ended his eulogy for his former political opponent could also be seen as a dig at Trump, or just a summary of who McCain was as a politician. "That's perhaps how we honor him best, by recognizing that there are some things bigger than party or ambition or money or fame or power, that there are some things that are worth risking everything for," Obama said. "Principles that are eternal. Truths that are abiding."

Obama said the country is in McCain's debt for his long service. "At his best, John showed us what that means. For that, we are all deeply in his debt," he added.

Obama wasn't the only speaker to take subtle digs at Trump. McCain's daughter Meghan McCain, took her own shots at Trump during her eulogy. She said, in a direct reference to President Trump's campaign slogan, "The America of John McCain has no need to be made great again because America was always great," she said.

New Yorker staff writer Susan Glasser tweeted that the applause the line got in the cathedral was unusual. "The applause ringing out at the Cathedral when Meghan McCain says 'America has no need to be made great again because America was always great' is not standard," Glasser wrote.

While he did make allusions to Trump, Obama knew just how much of an honor it was to be asked to speak at McCain's funeral. "President Bush and I are among the fortunate few who competed against John at the highest levels of politics. He made us better presidents. Just as he made the Senate better. Just as he made this country better," Obama told the rapt audience. "So for someone like John to ask you, while he’s still alive, to stand and speak of him when he’s gone, is a precious and singular honor."