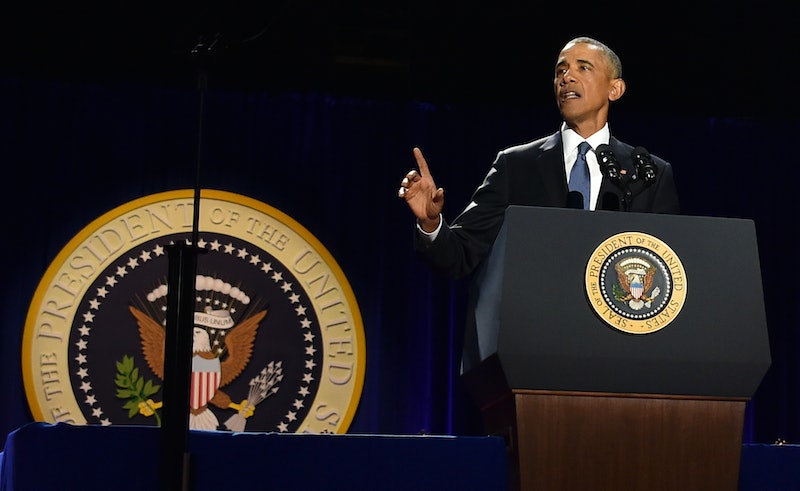 President Barack Obama's eight years have not been easy. First, there was the Great Recession. And then things got worse: the Republicans in 2010, empowered by the Tea Party, started opposing every single priority of the administration. Having a one-term president became their main goal with repealing Obamacare a close second. Well, now with a majority in both houses of Congress and president-elect Trump in the White House, that secondary focus is now a real possibility. And that is why Obama's explanation of "why we serve" from his farewell address should be a lesson for every Republican.

Of course it would have been better if they learned it eight years ago. But better late than never. Obama will lead by example if we are to believe what he said in Chicago Wednesday. He started his speech by laying out what he's accomplished during his two terms in the White House. Healthcare reform naturally was a big focus. "The uninsured rate has never, ever been lower," Obama said. "Health care costs are rising at the slowest rate in 50 years."

Then came the lesson for how public servants should act. Obama continued:

And I’ve said, and I mean it, anyone can put together a plan that is demonstrably better than the improvements we’ve made to our health care system, that covers as many people at less cost, I will publicly support it.

Can you imagine the Republican leadership saying something like that? Even the now rational-sounding 2012 GOP candidate Mitt Romney said things like, "President Obama demonizes and denigrates almost every sector of our economy," during the campaign that year. But Obama is once again going high when the political opponents go low. Here's his explanation why:

Because that, after all, is why we serve. Not to score points or take credit. But to make people’s lives better.

That's right. To make people's lives better. That is, after all, the whole point of public service. Not to denigrate, demonize, or divide, but to make way for a better future. To use the country's resources wisely to make the economy work for everyone, keep us safe, and write rules that treat everyone fairly. If the Republicans find a healthcare solution that works — and this is very important, covers everyone, Obama is all for it.

That should be the way of all politicians — and it once was. Medicare and Social Security are extremely popular and in part that could be because their implementation was bipartisan both in 1935 when the Social Security Act was passed and 30 years later when Medicare passed. These solutions were not beaten down by a hostile opposition, but worked on by both parties to be the best bills possible. Imagine if that had been the case with the Affordable Care Act. Not one Republican voted for it.

And now that they've made repealing Obamacare such a priority, Republicans will have to take ownership of whatever comes next. Maybe the replacement will look a lot like the current plan, finally ending the argument over it. Even Kellyanne Conway, Trump's adviser, said there are "some pieces of merit in the current plan."

It almost seems naive for this to be Obama's attitude, but we should be glad that we have had such a principled politician leading the country these last eight years. Now we must ask the same of all those serving in Washington.

More like this
Romance Authors Are Mobilizing For Reproductive Rights
By Natalia Perez-Gonzalez
New Coins Unveiled As King Charles III's Reign Gets Underway
By Sam Ramsden
How To Decide Between HIIT & LISS Workouts
By Carolyn Steber
I Tried The Air Up Water Bottle, Which Flavors Your Drink With Scents
By Carolyn Steber
Get Even More From Bustle — Sign Up For The Newsletter