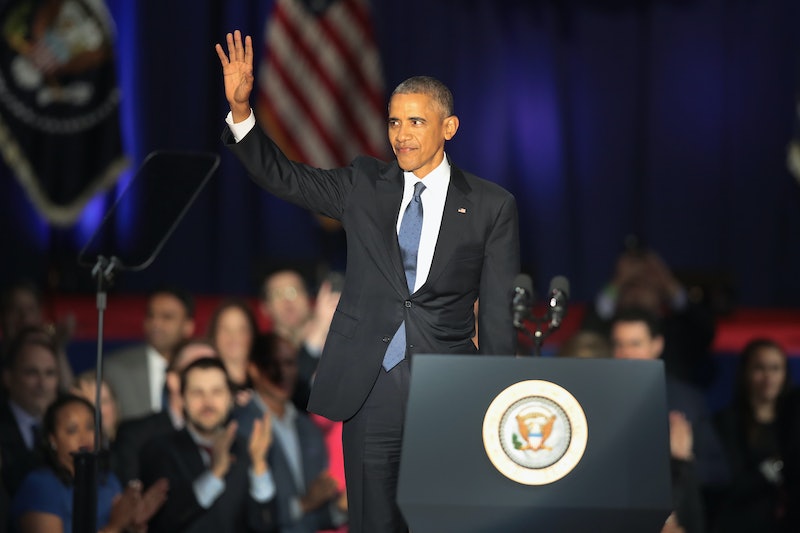 On Tuesday, President Obama said goodbye to the American people. He won't officially leave office until Inauguration Day, but his final primetime speech to the public was an opportunity for the outgoing POTUS to impart his last words of advice to the people who voted him into office — and to the people who didn't. Although he has promised a smooth transition with the next administration, Obama's farewell speech still hit Donald Trump in some subtle ways.

"If we decline to invest in the children of immigrants, just because they don't look like us, we diminish the prospects of our own children — because those brown kids will represent a larger and larger share of America's workforce," Obama said during his farewell address on Tuesday. He cautioned Americans against falling into prejudicial and discriminatory ways, but he also seemed to issue a warning for Trump. On the campaign trail, Trump often seemed to offend diverse populations, such as Mexican immigrants and Muslims. However, as president, Trump will have to face "those brown kids" and Americans of all kinds of backgrounds.

Then, there were the references to the one percent. Obama seemed to indirectly scold Trump (and, perhaps, some other one percenters) when he described how "the wealthy withdraw further into their private enclaves." It can't be a coincidence that Trump often ducks away from New York City and the political circuit to his luxury Floridian retreat at Mar-a-Lago.

Obama also seemed to hit Trump on climate change. "Science and reason matter," he declared. Denying the problem, he said, "betrays future generations." Certainly, Trump isn't the only politician with a history of denying climate change, but on Jan. 20, he will be the one in the best position to do something about it.

For all of the subtle digs, though, Obama wasn't the first one to send a jab Trump's way. Moments into his speech, members of the audience booed loudly at the mention of Trump's name. To that, Obama quickly said, "No, no, no," wanting to keep things positive.

For the most part, he was able to keep things positive. Obama's farewell address wasn't filled with the gloom, doom, and fear that characterized much of the campaign trail last year. Rather, he left Americans with sound advice and a familiar message.

"It’s up to all of us to make sure our government can help us meet the many challenges we still face," he said. Throughout the address, he encouraged Americans to stay vocal, to be vigilant, and to take part in the political system. And, of course, he concluded with, "Yes, we can."