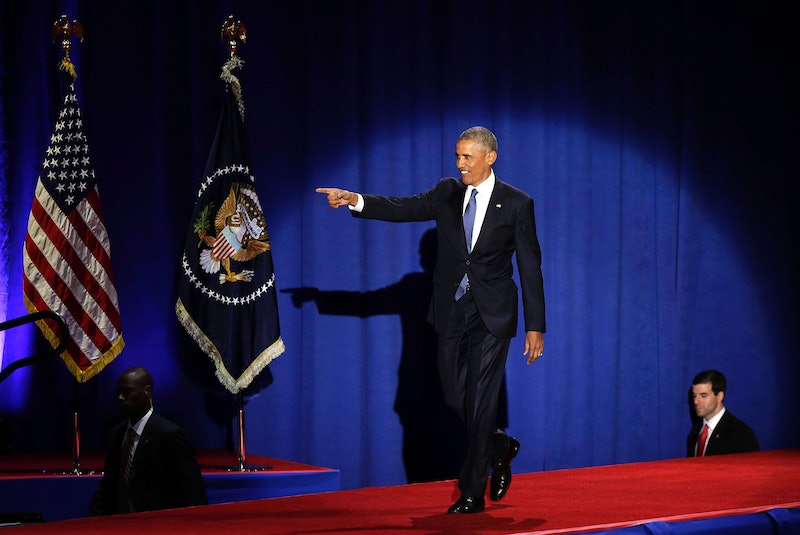 How has it possibly been eight years since President Obama first won election to the Oval Office? On Tuesday, many Americans of all ages and backgrounds turned into emotional moms on their kid's graduation day. That's because he left his supporters in a flood of tears, inspiring countless emotional tweets about Obama's farewell address to the nation.

As it turns out, Obama's way of saying goodbye was a lot like his way of saying hello. He introduced himself to the American people in 2008 with a message of hope and change. On Tuesday, his farewell address offered more hope and thanked Americans for supporting change.

"You were the change," Obama said. "Because of you, by almost every measure, America is a better, stronger place than when we started." When he was showered with undying applause, he made the night even more special with his signature wit: "You can tell that I’m a lame duck because nobody is following instructions. Everybody, have a seat."

Obama's address also reminded Americans of the notable work he has done in office, from passing healthcare legislation to creating jobs across various branches of the economy. Plus, he called Vice President Joe Biden his "brother" and "the best decision." Three cheers for a graceful presidency and a forever friendship. All in all, it was enough to make viewers tear up.

You are not alone, @sarizzle. We are all here for you.

Bravery is watching Obama's farewell address while working out.

Obama + Biden forever, am I right?

It was the best hug of the night, TBH. I bet they were wearing their friendship bracelets.

What will we do without new Biden GIFs??? At least his last GIF included a finger-gun.

Last GIF, last meme, last reference to Biden's aviators — why must all good things come to an end?

Can someone please help her?!?!

The phrase "ugly crying" was indeed made for times like these. So was the phrase "thank you."

Ugly crying was an important part to the Tuesday night routine.

There is nothing low-key about the end of the Obama administration. Don't hide your low-key tears!

It was game over when Obama began to hold back tears. He got emotional when he addressed his family. In true Obama fashion, he delivered a heartfelt message that apparently could have made Jesus cry.

She didn't have her younger sister by her side on Tuesday night, but Malia Obama's emotional response to her father's speech was heartfelt enough for both Obama daughters.

Malia's tears gave some viewers ALL THE FEELS.

Obama often makes touching remarks about his wife. Those remarks will be missed.

Tuesday was that moment when "Thanks Obama" is trending and it's actually a good thing.

"Thanks Obama" meant tears on Tuesday.

It got more emotional as the night wore on — even for Obama.

"Sob In The Shower"

This seems like an appropriate response for the night.

Let's not forget how emotional Obama's presidency was for many Americans at the very start. Now, it has come full circle in the most bittersweet way.