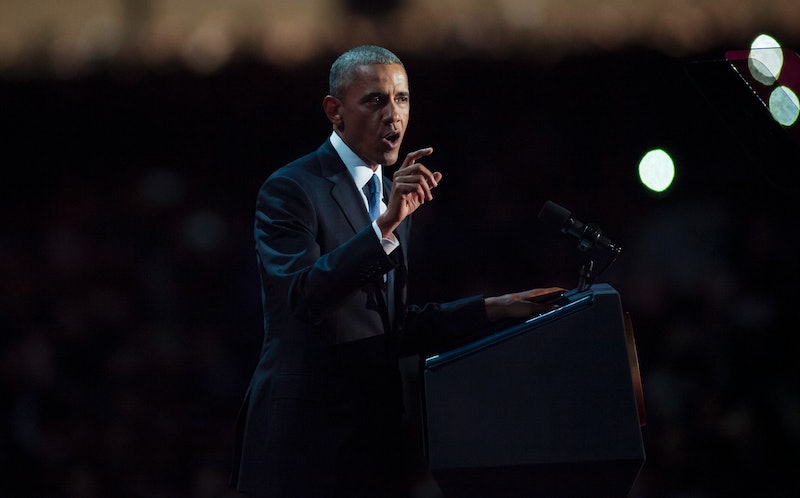 In his final interview as president with 60 Minutes, President Obama spoke Sunday about one of the biggest domestic threats to America's well-being: political partisanship. The president said that partisanship is "weakening" America, and he's right. While American politics has always been combative, the divide that currently exists between the two major political parties is abnormally large and historically unprecedented. This has already caused serious damage to the country, and unfortunately, there's no sign that things will become less polarized any time soon.

"I was surprised and continue to be surprised by the severity of the partisanship in this town," Obama told Steve Kroft. "The incentives for politicians in this town to be so sharply partisan have gotten so out of hand that we're weakening ourselves."

There's quite a bit of evidence to back this up, which congressional scholars Thomas Mann and Norman Ornstein did an excellent job citing in their 2011 book, It's Even Worse Than It Looks. Mann and Ornstein wrote that the recent polarization between the two parties has resulted in the perception of a "deeply dysfunctional government." They also concluded, more controversially, that this polarization was "clearly asymetric," almost entirely the result of developments from within the Republican Party.

These developments didn't begin when Obama took office, but they've become impossible to ignore under his presidency. It's not a surprise that Obama feels the same way.

If you want evidence of how polarized American politics is, you don't have to look very far. At several points in the last eight years, for instance, Congressional Republicans have pulled support for their own policies after Obama announced his support for them. We saw this in 2010, after Obama threw his support behind the Conrad-Gregg deficit commission proposal. Originally, seven Republicans co-sponsored the bill; after Obama announced his support, all seven withdrew their support and filibustered it, as its passage would have delivered Obama a political win.

"No single vote by any single senator could possibly illustrate everything that is wrong with Washington today," Fred Hiatt wrote in The Washington Post. "No single vote could embody the full cynicism and cowardice of our political elite at its worst, or explain by itself why problems do not get solved."

And this wasn't an isolated incident. In 2012, Senate Republicans introduced a bill that would give the president unilateral authority to raise the debt ceiling. The intention of this bill was not to affect policy, but to embarrass Democrats by forcing them to vote against it — as illustrated when Democrats called Republicans' bluff and voted for the proposal, resulting in Republicans filibustering their own bill. Those Republicans included then-Minority Leader Mitch McConnell, who proposed the legislation to begin with.

There are many more examples of GOP partisanship wreaking havoc, like the debt ceiling crisis of 2011 and the government shutdown of 2013. These were self-inflicted wounds that caused real damage to the country — the debt ceiling crisis resulted in Standard & Poor's downgrading America's credit rating for the first time in history — and they were caused solely by the GOP's self-stated goal of opposing Obama and Democrats on every policy, regardless of substance. And let's not forget that Obamacare, now the GOP's favorite boogeyman, was based on a Republican policy proposal from the 1990s, which was later enacted into law by Republican Gov. Mitt Romney in Massachusetts.

"The Republican Party has become an insurgent outlier," Mann and Ornstein wrote in 2011. "[It is] ideologically extreme; contemptuous of the inherited social and economic policy regime; scornful of compromise; unpersuaded by conventional understanding of facts, evidence and science; and dismissive of the legitimacy of its political opposition."

Obama has been grappling with this for his entire presidency. It's nice to hear him give voice to the problem, as he did Thursday in his 60 Minutes interview. What's far less clear, however, is how to solve the problem.