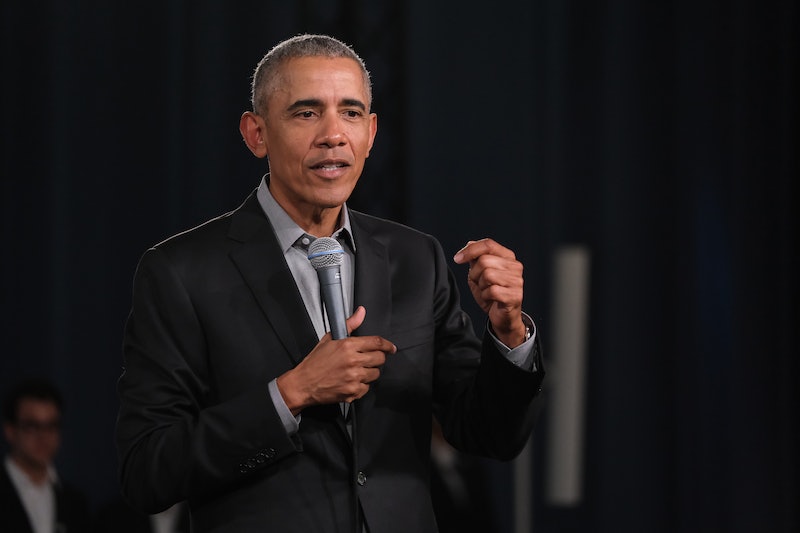 While former President Barack Obama has left the White House behind, he hasn't shed his passion for public service or civic engagement. Most recently the former president sought to encourage more young people to get involved with politics while speaking at a town hall in Europe over the weekend. In fact, this cool quote from Obama on voting gets to the heart of why young people should vote.

"Michelle and I talk sometimes and when we hear that young people aren't voting or participating, we say to them, 'You would not let your grandfather or grandmother decide what clothes you wear or what music you listen to, so why would you let them decide the world you're going to live in and the politics that you're going to be subjected to?'" Obama said while speaking at a town hall the Obama Foundation hosted for a number of young European leaders in Berlin, Germany, on Saturday. "Why would you give away that power and that authority?" he added.

Obama encouraged those in the audience to, as part of their civic engagement, cast ballots in the European Parliament elections slated to be held in May. "You've got a European Parliamentary election that's coming up," Obama said. "It goes without saying that all of you need to vote, if you are eligible, and your friends do too."

But the former U.S. president stressed that voting wasn't where young people's civic engagement should begin and end. "As we all know, casting a ballot is just the start," Obama said. "I always used to say that the most important office in a democracy is not president, or prime minister, or chancellor, or governor, or mayor. It's citizen. Change happens because citizens are mobilized and force change."

The Obama Foundation, which is a nonprofit and nonpartisan organization based in Chicago, reportedly plans to assist young European leaders and activists in tackling a variety of different issues. "The future of Europe lies with these young leaders, and the Foundation wants to help them advance and scale their work," Bernadette Meehan, the foundation's chief international officer, said in a statement announcing Obama's Berlin town hall last month. "We look forward to hearing how the Foundation can best support these young leaders, who already are doing inspiring work to advance positive change, hand in hand with their communities."

Speaking in Berlin on Saturday, Obama said that while there were a number of issues he'd wanted to continue working on after his presidency ended, he felt that the biggest impact he could have would probably come from supporting, engaging, and partnering with the next generation of leaders. He went on to say that he, in conjunction with his foundation, hoped to support young leaders across the globe in addressing issues like climate change, women's rights, and inequality.

"If we can get young leaders like you to begin to work together, if we can provide you with more tools, more resources, more attention, mentoring, maybe a little bit of inspiration... then you will change the world and I can sit back and relax a little bit," he joked.