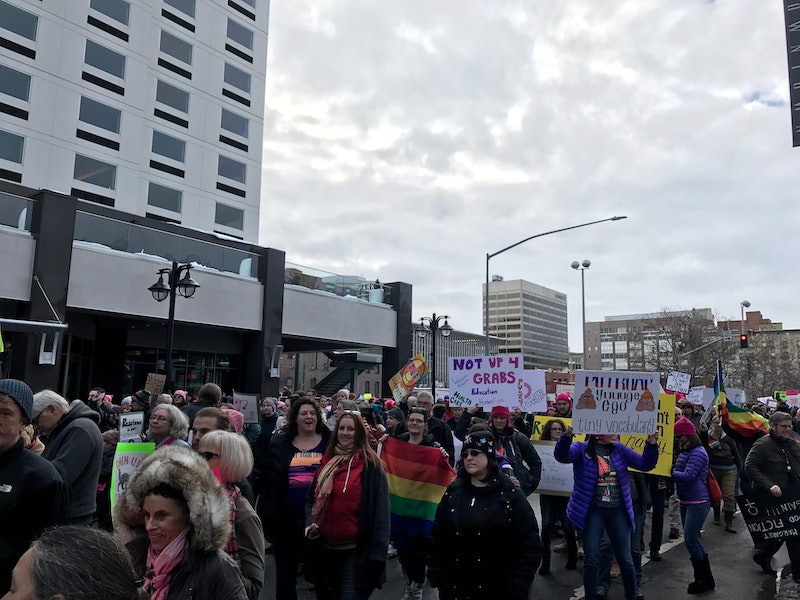 I went to the Women's March on Washington on Saturday, but it's a little different than what you're thinking of. I live in Washington state — a clarification I find myself having to make fairly often — and marched with around 8,000 other people in Spokane. With such great turnout in places like D.C., New York, and Los Angeles, it's easy to focus on those marches and forget about the ones that happened in lesser known cities. But that's exactly what we cannot do. The Women's March and its mission is about equality, inclusivity, and unity, so don't let any march be ignored. To those who marched in smaller towns across America that might have been overlooked, I see you. I'm with you.

Spokane is the second-largest city in Washington, and it has a population of around 200,000, though the county makes it closer to 500,000. In comparison, the District of Columbia itself has a population of more than 650,000 people, but if you consider the whole D.C. metro area, it's actually more like 6 million. Organizers in Spokane expected a lower attendance, like many marches around the country, but people from eastern Washington and the northern Idaho area showed up in numbers that felt stunning, even if you consider that the 8,000 people who marched in Spokane make up less than 2 percent of the 500,000+ people who marched in the other Washington.

More than 600 sister marches took place across the world on Saturday, many even smaller than Spokane's. In Fargo, North Dakota, an estimated 1,000 people marched for equality. Hundreds reportedly marched on the capitol in Jackson, Mississippi. In Anchorage, Alaska, the state's biggest city, thousands showed up, but the local newspaper also reported 38 people marched in the small community of Unalakleet, a village of only 700. In Longville, Minnesota, one woman had a solo march of her own.

To those who marched in places like Fargo, Jackson, Unalakleet, and Longville, I see you. I'm with you.

There's comfort in numbers, as the saying goes, and organizers all over were impressed by their turnout. Spokane didn't expect the overwhelming number of people who showed up, possibly because it felt like more people were celebrating inauguration rather than protesting it. In the general election, Donald Trump received nearly 50 percent of Spokane's vote, compared to Hillary Clinton's 41 percent. Many red towns in the United States saw women marching despite being an outlier when it comes to political beliefs. The courage it takes for many women in small towns or in conservative towns must be recognized.

To those who worked up the courage to demand equality in a town where the majority claims you already have it, I see you. I'm with you.

Another march that might have been ignored was one that took place online. The Disability March was a virtual protest created for people who might not have the physical ability to march. People could send in their stories of why they're marching, and the Disability March got so many entries that it has been unable to post them all. The website wrote a thank you to those who participated: "Thank you for participating and for caring about the rights and needs of those who otherwise would have been invisible to the public and the press."

To those who marched online, I see you. I'm with you.

The Women's March unity principles state, "We must create a society in which women — including Black women, Native women, poor women, immigrant women, disabled women, Muslim women, lesbian queer and trans — are free and able to care for and nurture their families, however they are formed, in safe and healthy environments free from structural impediments."

That is what's important, and that's what people around the country were fighting for Saturday. It wasn't just D.C. or Los Angeles or New York or Chicago. It was Spokane and Fargo and Jackson and Unalakleet and Longville and cities across the United States that chose Trump. If you want to uphold the principles of the Women's March, you cannot ignore those who are easier to overlook. Many women around the world came together in unity for a day to make their voices heard, not just in big cities, but in the small towns, too.

To those who joined the Women's March, wherever and however that might have been, I see you. I'm with you. Thank you.