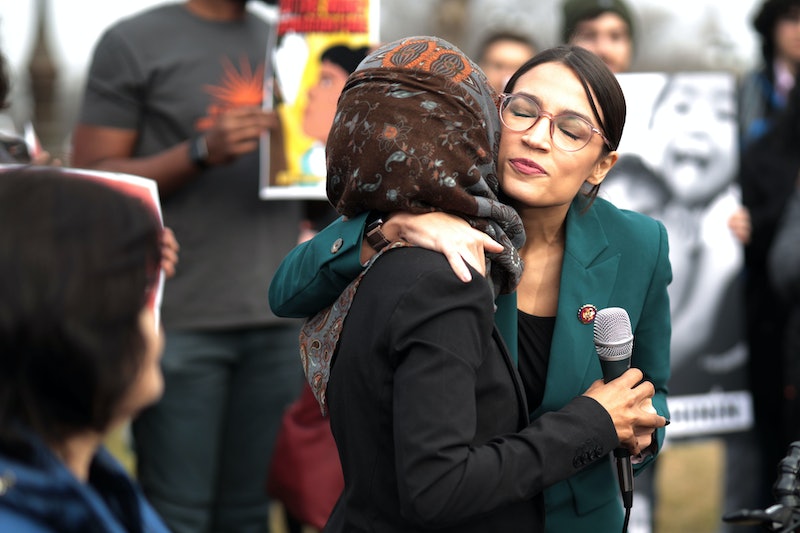 On Wednesday evening, a college Republican group in Ohio apologized for an inflammatory comment it had sent out about New York Rep. Alexandria Ocasio-Cortez. The Ohio College Republican Federation (OCRF) described Ocasio-Cortez as a "domestic terrorist" in a fundraising email earlier this week, prompting a swift rebuke from the freshman lawmaker. Ocasio-Cortez criticized Republicans for their "uncalled for rhetoric," and said in a tweet that she and other progressive lawmakers see a spike in death threats every time incendiary language is used against them.

A screenshot of the fundraising email, posted to Twitter by the Center of Public Integrity's Dave Levinthal, showed the OCRF urging people to make donations and arguing that their "peers are being brainwashed on a daily basis by Marxist professors who hate America and capitalism." Ocasio-Cortez is not a "role model," the text in the email said, but instead a "social justice warrior" that young conservatives must "fight back against."

Following some backlash, the OCRF subsequently said in a statement on Twitter that it didn't “approve of the message" sent out about Ocasio-Cortez. "The OCRF does not condone the unauthorized email sent out in our name," the statement read. "We apologize to Congresswoman Ocasio-Cortez for the use of unacceptable language in this email, and we do not approve of the message conveyed."

But this is not the first time that Ocasio-Cortez has faced outrageous commentary from the right; conservatives have criticized everything from her work as a bartender to her choice of clothing. In a Wednesday evening tweet, Ocasio-Cortez argued that this sort of criticism can be dangerous.

According to Axios, both Ocasio-Cortez and Minnesota Rep. Ilhan Omar have said that they see a spike in death threats every time they are criticized by conservatives. In fact, Time reported last month that Ocasio-Cortez receives so many death threats that her staff members have been trained by Capitol Police to perform risk assessments of all her visitors.

In Omar's case, meanwhile, conservatives have attempted to frame her as un-American ever since she was elected, and The Daily Beast reported that she faced a surge in death threats just this week after Fox News circulated an out-of-context comment she made about 9/11.

Last month, Omar delivered a speech at a banquet for the Council on American-Islamic Relations (CAIR), Vox reported, in which she said that organizations like CAIR are crucial in making sure that Muslims across the country don't "lose access to our civil liberties" due to the actions of a small group of people. But conservatives only quoted a small portion of her speech — "some people did something" — to make it seem as though Omar was minimizing the impact of 9/11, prompting threats of deportation and even murder from her opponents, according to Vox.

In her Wednesday tweet, Ocasio-Cortez remarked that she, Omar, and other progressive lawmakers have consistently faced death threats and more as a result of conservative critiques.

"This puts me in danger every time," Ocasio-Cortez tweeted on Wednesday, referring to comments like the OCRF's. "Almost every time this uncalled for rhetoric gets blasted by conserv. grps, we get a spike in death threats to refer to Capitol Police. Multiple ppl have been arrested trying to harm me, Ilhan, & others. @GOP, what’s it going to take to stop?"