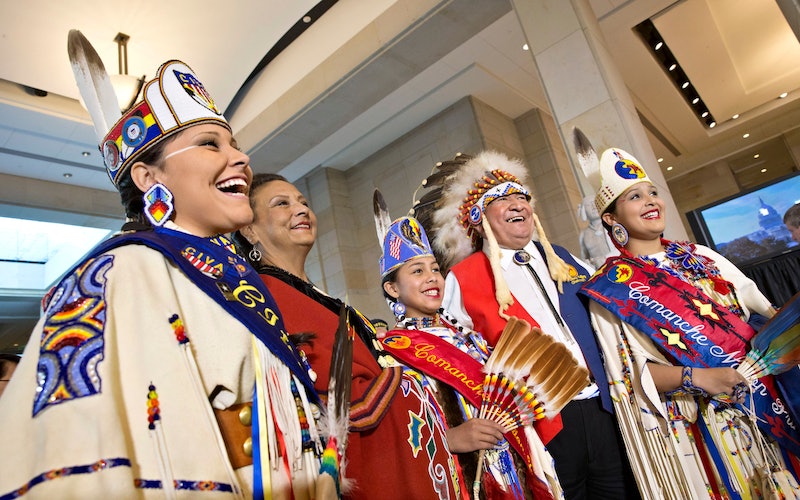 “I think moving it to Columbus Day, I don’t see any downside to it at all,” said Stitt, who became the first Native American governor of a U.S. state in America's history earlier in the year, according to the Associated Press. “It just gives us one opportunity to celebrate Columbus, but also the indigenous people here in America.”

President Franklin D. Roosevelt declared Columbus Day a national holiday in 1934. However, the brutal and horrific nature of Columbus' conquest (he sold Indigenous preteens as sex slaves, to cite but one example), as well as the fact that the man never actually set foot in America, has caused many localities to reexamine the wisdom of celebrating him in recent decades.

In 1992, Berkeley, California became the first city nationwide to replace Columbus Day with Indigenous Peoples' Day, according to TIME. Dozens more followed, and soon, so did a few states: Minnesota, Vermont, Maine, Alaska, Maine, New Mexico, and South Dakota have all replaced Columbus Day with Indigenous Peoples' Day or a similar variant, according to Q106.5.

Unlike similar measures across the country, the bill signed in Oklahoma Friday does not eliminate Columbus Day altogether, but merely moves Native American day so the two fall on the same day.

There are 38 federally recognized Indigenous tribes in Oklahoma, according to the state's Department of Transportation, and Native people comprise about 10 percent of the state's population, according to Cherokee Nation. The bill signed on Friday was supported by the Inter-Tribal Council of the Five Civilized Tribes, a coalition that represents over 750,000 tribal citizens, according to KXII.

However, moving Native American Day to overlap with Columbus Day has nevertheless drawn controversy in the state. When Fallin vetoed a bill that would have done the same in 2018, she said in a statement that it "could be viewed as an intentional attempt to diminish the long-standing support of November being proclaimed annually as Native American Heritage Month in Oklahoma, and the third Monday in November as ‘Oklahoma Native American Day," Tulsa World reported at the time.

“The Cherokee Nation is thankful for the state legislature and Governor Kevin Stitt recognizing the integral role Native people play in the history, economy and future of our state and country,” Cherokee Nation Principal Chief Bill John Baker said in a statement. “The second Monday of October will be a day for people across the state to celebrate and honor the significant contributions of Native tribes as well as the beautiful culture of our Native people.”

Cherokee Nation Chief of Staff Chuck Hoskin — who was a member of Oklahoma's House of Representatives when the previous bill was vetoed — said that the new law is "an opportunity for Native people across Oklahoma to unify on this day."