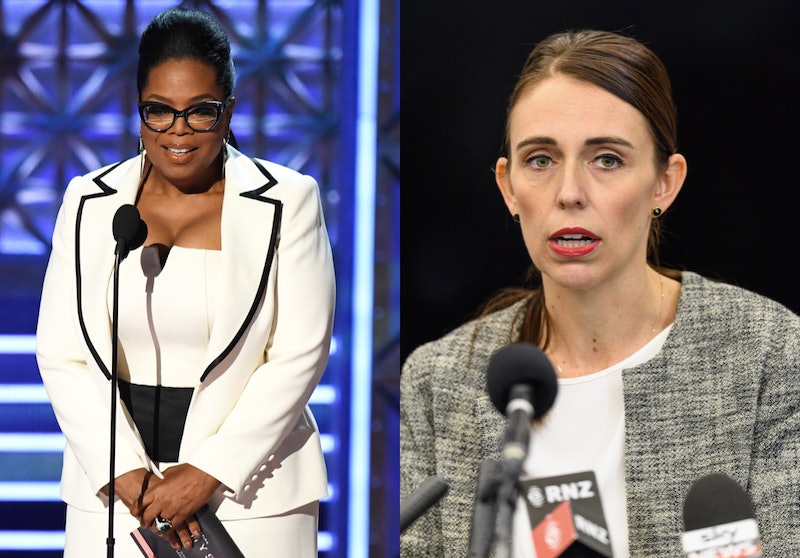 Many have praised New Zealand's prime minister's compassionate leadership following a terror attack that killed at least 50 worshippers at a mosque in the country's Christchurch community in March. Among those who lauded Jacinda Ardern's response to the shooting is Oprah Winfrey, who called Ardern's leadership courageous in a speech at the Women in the World summit Thursday, The New Zealand Herald reported.

"I've never seen such leadership," Winfrey said at the New York City summit, according to The New Zealand Herald. "The prime minister is a woman who has such courage in her convictions and has set a global standard for leadership with her response."

"Fifty murders could have brought even more destruction but instead led to a portrait of the Prime Minister displayed across Dubai's tallest building with the word 'peace' shining above it," Winfrey added. As the Muslim community of Christchurch mourned in March, Ardern was seen visiting locals while donning a black scarf over her head as a display of respect for Islamic custom, The Washington Post reported.

It was that regard and empathy that Winfrey praised. "So women across the country showed their solidarity by wearing head scarfs to emulate the hijab that Ms. Ardern chose to mourn in and the Arab community felt their benevolence," she said on Thursday.

At the memorial for the Christchurch shooting, Ardern addressed a crowd of thousands of people at Hagley Park, The Guardian reported. In her speech, she strongly condemned the terror attack and said: "What words adequately express the pain and suffering of 50 men, women and children lost, and so many injured? What words capture the anguish of our Muslim community being the target of hatred and violence?"

The New Zealand premier said that racism and violence would not be tolerated in the country. "An assault on the freedom of any one of us who practices their faith or religion, is not welcome here. Violence, and extremism in all its forms, is not welcome here," Ardern declared, per The Guardian.

It didn't take long for people to notice Ardern's heartfelt words and vows of solidarity with Christchurch's Muslim community. The Washington Post reported that the New Zealand prime minister won heaps of praise across the world for her words and gestures of unity and peace. Perhaps most notable, though, was Ardern's unapologetic and swift announcement that the country will ban military-style semi-automatic weapons and rifles, CNN reported.

Pointing to Ardern's style of leadership, Winfrey said on Thursday that it was up to women to "set the agenda" and "redefine the message" for the world, The New Zealand Herald reported. Among other things, Winfrey added that improving the world would require introspection and channeling the regard and compassion of the New Zealand premier.

"We have to make the choice every single day," Winfrey said to her audience, "to channel our own inner Jacindas; to exemplify the truth, and the respect and the grace that we actually wish for the world."