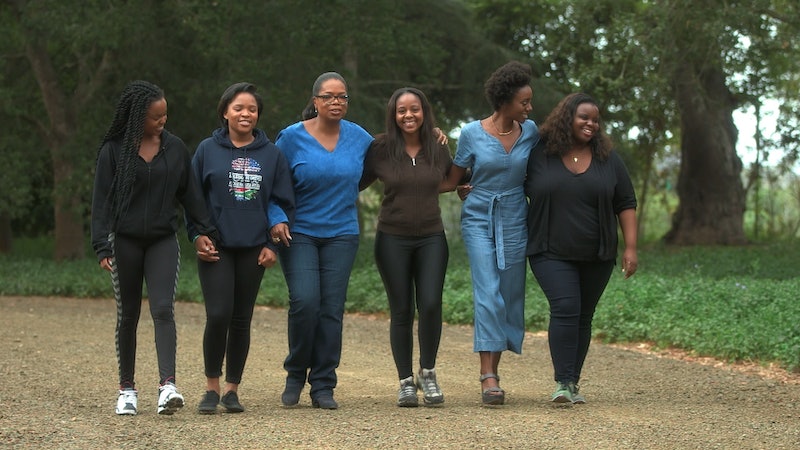 Many feel pressure to succeed after high school, but a certain group of young women may feel the very most. The Oprah Winfrey Leadership Academy for Girls (OWLAG, as students call it) graduated its first class from its school in Henley-on-Klip, South Africa in 2012. OWLAG students are handpicked by Oprah herself, and attending the academy is viewed as a golden ticket away from the poverty, bigotry, and trauma experienced by many black South African women.

O Girls, an upcoming documentary that will premiere Jan. 15 at 8 p.m. EST on Fusion, will explore this question. Kimberly Brooks, a former staffer at Harpo (Oprah's production company), visited many of the graduates of that first class to learn about their successes and struggles after graduation.

To say these young women began life at a disadvantage is an understatement. Sexual abuse has been "normalized" in South Africa, according to an article by Rebecca Davis that in the Guardian. And in a nation where 1 in 5 adults suffer from HIV, according to the United Nations, many talented young girls may not live to graduate high school.

In O Girls, Oprah tells Brooks that OWLAG students have suffered, on average, five or six traumas — major tragedies like the loss of a parent or sexual abuse — before they even start at the school. For girls whose families have been ravaged by disease and poverty, OWLAG is supposed to serve as a life preserver. To many of the women featured in O Girls, it has.

In her graduation speech, Bongeka describes beginning the Academy "having never read a novel." Now, she is earning a master's degree at Oxford.

How does the academy make such a big difference in its graduate's lives? Brooks, who has made repeat visits to OWLAG and has kept in touch with many of the graduates, told Bustle that the school works to empower its students despite — and because of — past trauma:

Oprah has helped them embrace their story and change the narrative ... and help them understand that their circumstances do not define who they are. That they are enough, that they are great, that they are worthy.

Not every OWLAG graduate's story is necessarily like Bongeka's. Many of the young women stay in South Africa, either to attend college or to return to their communities armed with the knowledge to empower others.

Moreover, many graduates are still in need of the holistic support they receive at the Academy even after their time there is done. According to the documentary, Oprah remains in touch with the graduates, who have her personal cellphone number and call her "Mama O," and host families in the United States help students who come to attend college.

Still, some graduates grapple with feelings of failure, particularly the ones who are unable to complete college in four years. "An OWLAG girl," a graduate named Charmain says in O Girls, "is a girl who never failed."

"In the movie, Brooks asks Bongeka where she would be today if not for OWLAG. With a sad, thoughtful seriousness, Bongeka says, 'I'd probably be dead,' describing how she would likely be impregnated and married off. '[It] would have led me to, honestly, take my life.'"

How do they find support while facing an uncertain future, especially when they leave their home? Brooks told Bustle that the family ties they forged at OWLAG carry over to the States. "Once you graduate college, you still need support," Brooks said, and Oprah "is still like a mother to them through college and they have each other."

Watching O Girls, it is clear why that support matters. In the documentary, Bongeka, for example, seems acutely aware of the inequities she faces as a South African woman. Her parents are proud of her, she says to a friend, but "it is never the same amount of pride that they would have if I were a boy. I could literally go and discover a whole new planet..." She doesn't finish that sentence.

In the documentary, Brooks asks Bongeka where she would be today if not for OWLAG. With a sad, thoughtful seriousness, Bongeka says, "I'd probably be dead," describing how she would likely be impregnated and married off. "[It] would have led me to, honestly, take my life."

Instead, she was selected to get an education and has achieved an astonishing level of success. Each of the women profiled in the film — college graduates and non-graduates alike — seem remarkable in their ability to work to better themselves and their communities despite adversity. Yet given their home country's legacy of poverty, racism, and sexism, some of their biggest challenges may still lie ahead.

Ultimately, then, O Girls highlights that the graduates of the Oprah Winfrey Leadership Academy are at once among the luckiest and unluckiest women in the world.