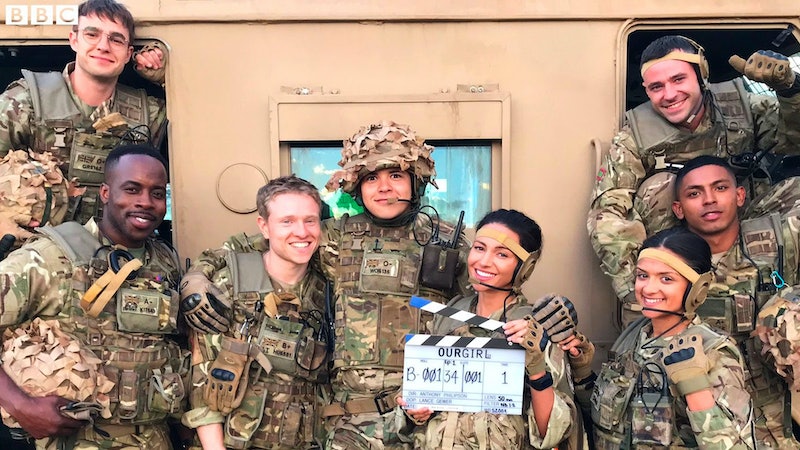 It's official: the fourth series of Our Girl has begun filming. While that means there's still a pretty long wait before it actually premieres, thankfully the BBC aren't holding back on the deets of the latest instalment. Yeah, it's exciting to see who will be returning, but as with any new series a host of fresh faces will be introduced, and the new cast of Our Girl contains several that you'll totally be familiar with.

As Digital Spy reports, series four will introduce a batch of new characters into Section 2 which includes Nico Mirallego (Hollyoaks), Will Attenborough (Dunkirk), Amy Leigh-Hickman (Ackley Bridge), Nebras Jamali (The Looming Tower), Josh Bowman (Revenge), Kaine Zajaz (Raised By Wolves), Nabil Elouahabi (Eastenders), and Badria Timini (Unforgotten). Not much as been revealed in regards to their roles, but executive producer for BBC Studios Hilary Salmon has given some insight as to what they'll bring to the series.

"For series four of Our Girl some brilliantly drawn new character have joined 2 Section and are getting used to the discipline, camaraderie and heart-ache of army life for the first time," she told BBC in a statement. Salmon also revealed that Mirallegro, Hickman, Zajaz, and Attenborough have "successfully completed boot camp and are looking forward to the rigours of filming," which could suggest that these four will be part of the Afghanistan portions of the show as opposed to the scenes filmed in Manchester.

BBC also confirmed in the press release that Michelle Keegan will be returning to her role as Georgie Lane, and will be accompanied by Rolan Bell, Ben Batt, Mark Armstrong, Jack Parry-Jones, Sean Ward, Sean Sagar, and Dominic West. However, there's one pretty substantial name missing on that list — Ben Aldridge. Yep, it's official — BBC confirmed to Radio Times that Captain James won't be returning this series. There's no word as of yet as to whether he's alive or dead (seeing as the last time we saw him he and Section 2 were jumping off a cliff), but as the BBC have stated series four takes place a year after those events so who knows what could have happened.

What is known, however, is the reason why Aldridge isn't coming back. In an interview with Metro last December, the actor explained that his absence from this series was due to a conflicting schedule. "I'm doing another job which would make [me] pretty much unavailable for next year, depending on when Our Girl films. But I'm not sure I'd be available to be used," he explained. "I was never in contract to do another one, none of us were, so I guess it'd be basically who they could get back and, when they decide to do it, who's available kind of thing."

Who knows — maybe if filming continues further on into the summer Aldridge might be available to reprise his role as Captain James. But as Keegan teased to the BBC, this series will apparently "rip the heart of of our loyal fans and new viewers alike." Welp.