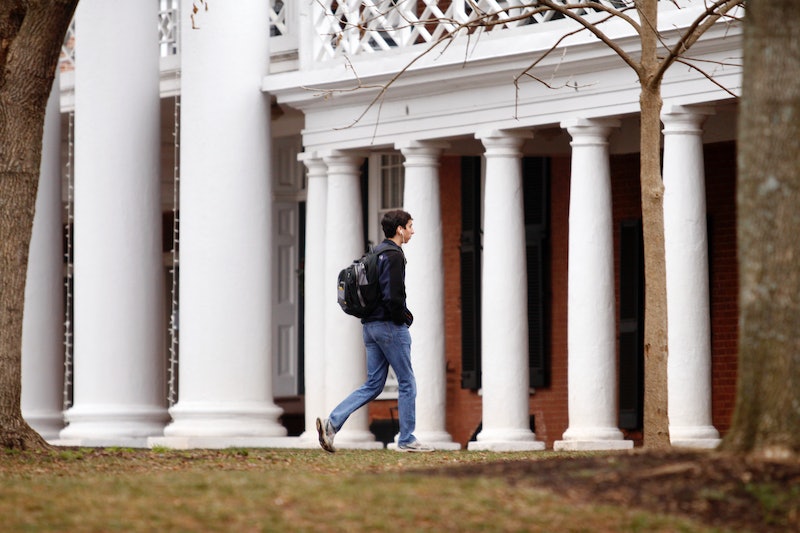 In a year's time, fraternity life on college campuses could look significantly different. Over 6,000 fraternity chapters' hard alcohol policy will change by Sept. 1, 2019, as the chapters' trade association has recently mandated that hard alcohol is banned within fraternities. This decision comes following years of concerns about drinking and safety at fraternity events.

The new policy was announced by the North-American Interfraternity Conference (NIC), an association that represents 66 different men's fraternities in the United States and Canada. There are over 6,000 chapters of these fraternities located on campuses around North America.

As BuzzFeed reported, this policy asserts that no alcohol that contains more than 15 percent alcohol by volume (15% ABV) can be present in any fraternity facility or at any fraternity event. All hard alcohol has over 15% ABV, while beer and wine typically fall under this threshold. The NIC also asserted that the only time hard alcohol can be served at fraternity events is if it is provided by a licensed and insured third-party vendor at a registered event.

In announcing the new policy, Judson Horras, NIC's president & CEO, reflected on the dangers of alcohol abuse and emphasized the importance of prioritizing safety for fraternity members. As Horras indicated via a statement on NIC's website:

At their core, fraternities are about brotherhood, personal development and providing a community of support. Alcohol abuse and its serious consequences endanger this very purpose ... This action shows fraternities’ clear commitment and leadership to further their focus on the safety of members and all in our communities.

NIC's announcement comes following several recent alcohol-related deaths in fraternities, including those in Louisiana and Pennsylvania. According to The Advocate, in September 2017, 18-year-old Maxwell Gruver died at a Louisiana State University fraternity house following a hazing ritual in which he was repeatedly required to drink large amounts of alcohol. Gruver died of alcohol poisoning the morning after the party.

As USA Today reported, in Feb. 2017, 19-year-old Tim Piazza died of severe injuries at a Penn State University fraternity house after consuming large amounts of alcohol during a bid acceptance event. Following his death, Piazza's parents, Jim and Evelyn Piazza, have worked diligently to seek to stop fraternity hazing. According to USA Today, the couple says that NIC has been "listening" to them and that the new policy constitutes a step in the right direction. As Jim told the paper, "It should make a meaningful difference ... There are other reforms they need to put into place, and there's still work to do. But this is a beginning."

NIC's new hard alcohol policy marks the latest step the association has taken to combat hazing and alcohol abuse. As the organization noted in its press release, in the past year it has implemented a variety of health and safety initiatives, including advocating for stronger anti-hazing laws, adopting Good Samaritan policies for providing medical aid, and testing other alcohol reduction measures, among other endeavors.

The hard alcohol policy will affect most fraternities in the United States, which have until Sept. 1 of next year to comply with the new rule. NIC also characterized this new rule as a "minimum expectation," noting that if the school in which fraternities are located has stricter alcohol policies, fraternities are also obliged to adhere to those policies.

More like this
The 5 Best SLS-Free Toothpastes, According To Dentists
By Amy Biggart and Danielle Calma
Got Brain Fog? Here Are The Best Supplements For Memory & Cognition
By Carolyn Steber
Chris Kaba's Family Continue Fight For Justice After Viewing Police Bodycam Footage
By Sophie McEvoy
Twitter Can’t Handle Liz Truss & Kwasi Kwarteng’s Drastic Tax Cut U-Turn
By El Hunt
Get Even More From Bustle — Sign Up For The Newsletter