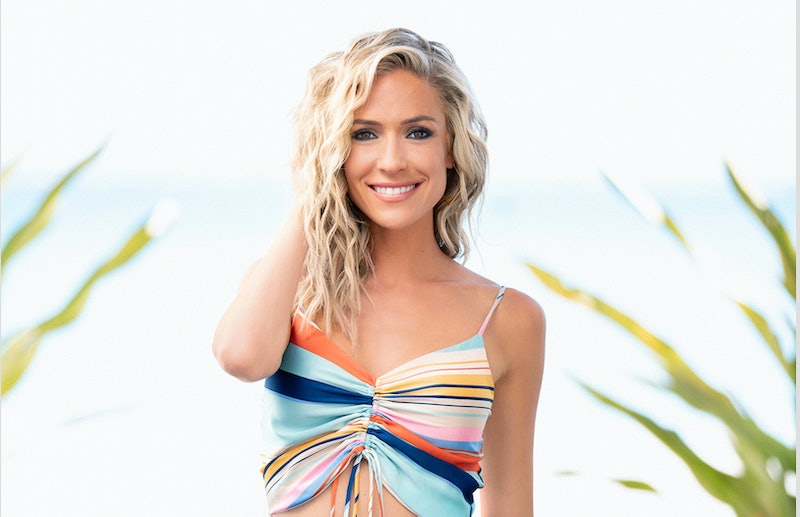 Despite the premise of Fox's Paradise Hotel, host Kristin Cavallari doesn't necessarily believe you can fall in love on reality TV. She would know: she's had her own experience navigating relationships on MTV's Laguna Beach and The Hills, and now with her E! show Very Cavallari (though she met her husband, former Chicago Bears quarterback Jay Cutler, offscreen). Paradise Hotel is a much different concept: whereas Laguna, The Hills, and Very Cavallari are day-in-the-life-style projects, Paradise is a dating show with a competitive element. Still, Cavallari is unconvinced.

"I don't know that you can really go on a TV show to find love," she tells Bustle. "I mean I know it's happened a few times but I think it's extremely hard to trust somebody. I think that obviously, if you're going on a TV show, there's other motives there than just trying to find love. So I think it just adds so many different layers to it that just become so complicated and stressful to me."

In Paradise Hotel, that other motive is money. The winning couple receives $250,000 — that is, if they don't double cross each other in the end. The contestants have to put a lot of trust in people they've only just met, which is probably why Cavallari says she would have never signed up for the series when she was single — though she adds that, "If I did do it, I think I'd be pretty good at the game."

Instead, Cavallari is more than content to hang out in Mexico with her family, host the show at night, and pop in just to stir the proverbial pot of drama, then watch the chaos emerge.

"I sort of get the best job because what I do is I go in and I drop little bombs on everybody, and then I leave and watch it unfold," she laughs. "So it's fun, stirring is fun for me. It's not necessarily me messing with everybody, it's just ... you're moving the story along and you have their information, and so I get to constantly surprise them with new twists and turns which, makes for good entertainment."

Very Cavallari and Laguna Beach fans alike know that Cavallari is no stranger to Mexico. The Laguna and Hills crew traveled there on more than one occasion, and now, she and her family vacation in Cabo often; it's even where Cutler proposed. So it's safe to say she's not mad about spending some time there for the next few weeks.

"They love it because it's a vacation for them," Cavallari says of Cutler and her three kids, Camden, 6, Saylor, 3, and Jaxon, 5. "And it's kind of nice because for the most part, I film at night so I'm able to be with them during the day, but work at night. And then rinse and repeat the next day."

Before long, she'll be back to front and center for Very Cavallari Season 3, which she says begins filming in July. Until then, catch her on Paradise Hotel on Thursdays at 8 p.m.