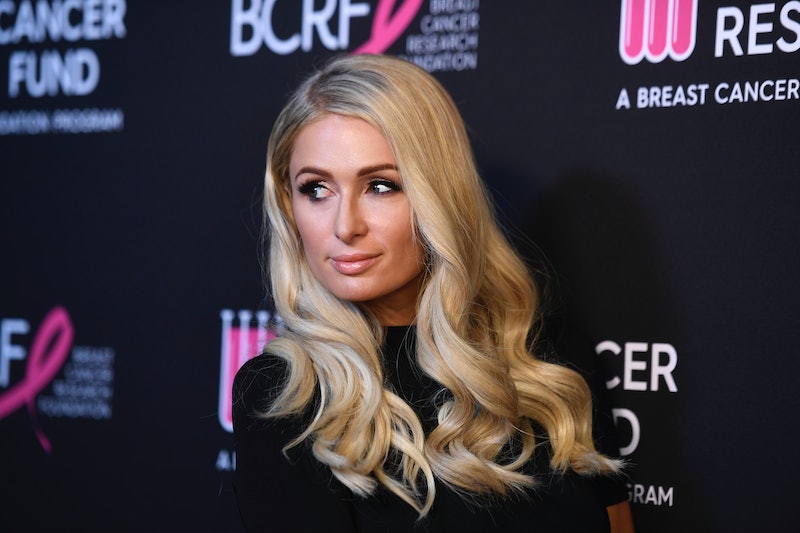 Since Paris Hilton and Kim Kardashian are total BFFs, it shouldn't come as a surprise to hear that the hotel heiress is thrilled about the Keeping Up With the Kardashian star's fourth baby news. In a recent interview, Paris Hilton spoke about Kim Kardashian's baby boy, per Us Weekly, and had something interesting to say about the little one's name.

During an interview with Extra on May 13, Hilton opened up about her friend's fourth bundle of joy, who was welcomed via surrogate on May 10, and related that she's been in contact with Kardashian recently, “[I spoke to Kardashian] when she was in the hospital." She also revealed that she's overjoyed over the happy news, saying that it's all, "So exciting."

While Hilton hasn't met the baby just yet (as she related that she's been traveling), she does seem to know one particular detail about the child that has fans speculating wildly. When asked about the baby's name, she initially revealed that she didn't know what it was, before conceding that she may have some insight on the moniker. But, don't count on the "Stars Are Blind" singer to reveal the name, as she said, "It's a surprise." In short, fans will have to wait a little bit longer for Kardashian to reveal the name herself.

Elsewhere in the interview, Hilton opened up about the KUWTK star's appearance in her upcoming "My Best Friend's Ass" music video. She revealed that she simply had to include her bestie in it, since Kardashian has a pretty famous backside and all. Additionally, she had some kind words to say about her longstanding friendship with the reality star, saying:

"We've known each other since we were little girls. We've grown up with each other and it's amazing to see the empires that we've both built."

She also added that there may be more surprises in store in addition to their "My Best Friend's Ass" collaboration. So, fans should definitely stay tuned for any Kardashian/Hilton updates.

Even though they've been friends for years, it did come as a bit of a surprise to fans back in December when Hilton and Kardashian were spotted hanging out at the Kardashian-Jenner family's annual Christmas Eve party. While the pair have a great deal of history together, they haven't exactly been seen hanging out in recent years (publicly, at least). Alas, it's nice to see that they're back to their bestie ways.

In addition to spending the holidays together, celebrating each other's birthdays, and filming iconic music videos, Hilton and Kardashian also hung out at the KKW Beauty mogul's recent baby shower. On May 11, the KUWTK star posted a slideshow of photos from her CBD-themed baby shower that highlighted all of her family and friends (including Hilton) who came to support her. She captioned the snaps with:

"We celebrated our baby boy about a week ago and now he’s here! He’s so perfect! Here are some pics of my CBD baby shower. I was freaking out for nothing because he is the most calm and chill of all of my babies so far and everyone loves him so much"

Seeing as though the pair's friendship is stronger than ever, it shouldn't come as a surprise to hear that Hilton may have some inside info on bestie's baby boy's name. But, since she's all about keeping the name a secret, you'll have to wait to hear about the surprise directly from Kardashian herself.