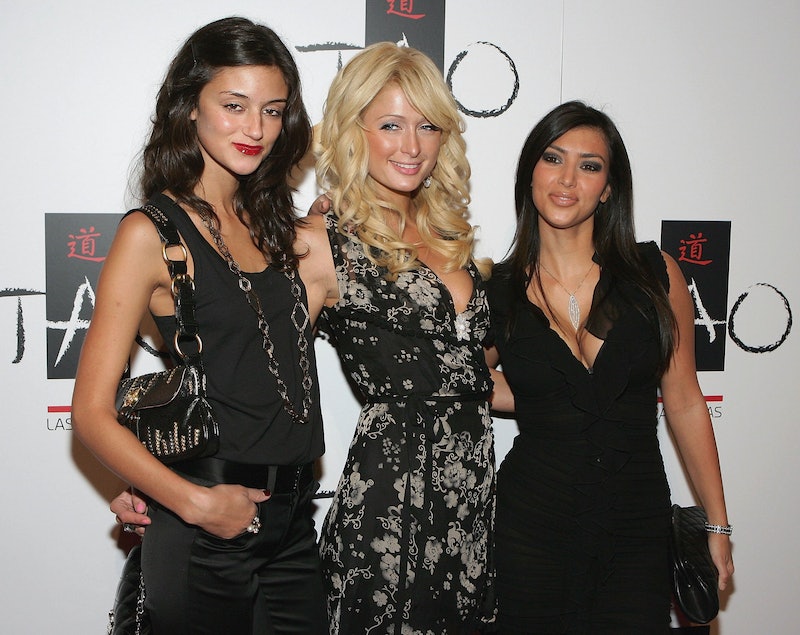 The early-aughts are officially back again, and its revival is about to have a brand new soundtrack. On Friday, May 3, Paris Hilton teased a new music video with Kim Kardashian on social media, adding that her cheeky new single will be all about her famous bestie's most iconic assets.

"#SecretProject with @KimKardashian," Hilton wrote on Twitter, along with a video of the two reality stars, wearing metallic dresses and posing for a selfie. "Can you guess what we're doing today?" Kardashian asks in the clip, while Hilton teases, "It's a surprise." Despite playing coy in her video, however, the former Simple Life star did drop a hint about what the "secret project" will be in the caption of her Twitter post, where she shared several music note emojis, surrounding the phrase, "I can’t stop looking at my #BestFriendsAss."

According to TMZ, Kardashian and Hilton were spotted filming a video for Hilton's new song — which is produced with Dimitri Vegas & Like Mike — outside Hollywood's Nightingale Plaza club on May 2. Despite being spotted on the video's Hollywood set, Kardashian kept her role in the video under wraps in her own posts on social media, simply sharing a selfie with Hilton on her Instagram Story. In addition to the Keeping Up With the Kardashians star, TMZ reported that Hilton was also spotted filming with RuPaul's Drag Race star Derrick Barry, who was impersonating another one of Hilton's former besties, Britney Spears, circa "I'm A Slave 4 U."

Hilton's decision to recruit Kardashian for her new music video is an homage to the pair's decades-long friendship, as the heiress-turned-perfume mogul revealed in a 2015 interview with Entertainment Tonight that they have known each other since they were "little girls." Hilton was one of Kardashian's clients pre-fame, when the future KKW Beauty founder was working primarily as a closet organizer. At the height of Hilton's The Simple Life fame — and on the verge of the premiere of Keeping Up With The Kardashians — the pair made frequent appearances in the tabloids as Hollywood "it girls."

"We’d go anywhere and everywhere just to be seen," Kardashian told Rolling Stone in 2015 about the pair's "celebutante" days. "We knew exactly where to go, where to be seen, how to have something written about you. All you had to do is go to this restaurant, or this party, talk about whatever you want to talk about, and it would be in the paper the next day." However, their friendship fell apart around 2008, after Hilton said that Kardashian's famous behind looked like "cottage cheese stuffed in a trash bag," during a radio interview, according to TMZ. (Maybe making her the subject of envy in her new video is Hilton's way of making it up to Kardashian?)

Of course, since they've known each other for so long, Hilton and Kardashian eventually mended their rift, and have become friendly once again. In fact, Hilton has become a regular at the Kardashian family's famous Christmas parties, and Kardashian has documented her appearances at Hilton's birthday parties and hang outs over the years.

Meanwhile, Barry's appearance in Hilton's video might be an homage to another one of her iconic celebrity friendships, with Spears in the mid-2000s. While the pair's relationship was short-lived, it did offer plenty of unforgettable celebrity moments at the time, including the now-iconic photo of Hilton, Spears and Lindsay Lohan in squeezed into a car together.

More than a decade after Hilton's friendships with Kardashian and Spears were on the covers of tabloids everywhere, it's clear that they still have a long-lasting impact on both the mogul and pop culture itself.