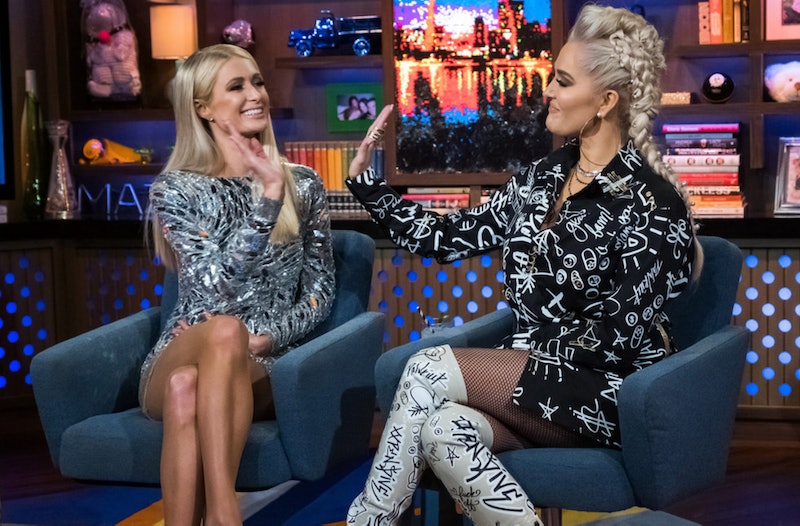 You might think it is only a matter of time before someone who is both a reality TV icon and Kyle Richards’s niece ends up holding a diamond in The Real Housewives of Beverly Hills opening credits. As it turns out, Paris Hilton joining RHOBH sounds about as likely as a velour hoodie-wearing Chihuahua belting out "The Star-Spangled Banner" at the next Super Bowl. Contrary to the rumors that bubbled up earlier this year, the "Stars Are Blind" singer is not actually trying to be on RHOBH after all.

On the Tuesday, May 14 episode of Watch What Happens Live with Andy Cohen, the star of The Simple Life and Paris Hilton’s My New BFF made it pretty clear that a main role on the Bravo reality show is not in her future. Like, ever. When a WWHL caller asked if the rumors regarding Hilton possibly becoming a Beverly Hills Housewife hold any water, she replied,

“No. First of all, I’m not a housewife. I’m not married, I probably never will be.”

Of course, you do not have to be married to be on The Real Housewives, but it sounds like that does not matter to Hilton. As she told WWHL host Andy Cohen, she is not exactly raring to be on any reality program. "I get calls [about being back on reality TV] every single day, but I say no," she said. “After The Simple Life, like how do you compare to that show?" She makes a fair point.

Hilton does not want to do the RHOBH thing, but that does not mean she is not down to share her hypothetical Real Housewives tagline with Cohen and the WWHL audience: "That's hot."

Come on, like it could ever be anything else?

Back in March, Radar reported that Hilton was supposedly thinking about joining the RHOBH cast. (The report has since been taken down.) However, when Instagram account @bravooverbrunch posted a screengrab of Inquisitr’s headline about Radar’s report, Kyle shut down the rumor in the comments. As sites like Inquisitr and Bravo’s The Daily Dish noted, the RHOBH veteran wrote, “I would love this but she never said this haha.”

Hilton never said she wanted to be a member of RHOBH's main cast, but she has said which Real Housewives show she would be on if she had to pick. Last November, Bravo's The Daily Dish asked her if she would rather pop up on her aunt's reality show, or if she'd prefer to appear on The Real Housewives of New York City alongside her mom's former assistant Bethenny Frankel. Hilton told The Daily Dish,

“I love both of them, obviously. I've known Bethenny since I was like a baby. She used to babysit me, actually. But Kyle is my aunt and my family, so I would do it with both of them. I can't really pick 'cause I love both of them. They're my family. But if I had to choose one, it would be Kyle 'cause she's my aunt.”