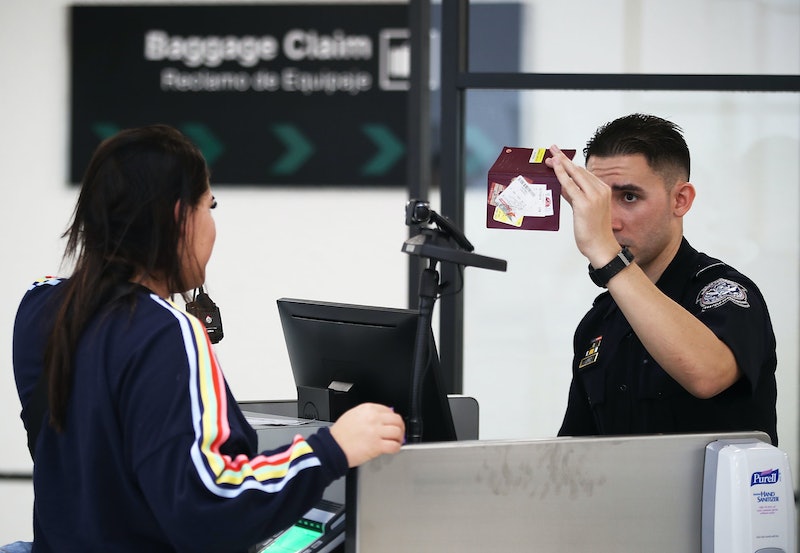 This week, the U.S. State Department changed the passport language for trans people in an abrupt move that caught the attention of LGBTQ advocates. When news of the changes spread and the department received particular criticism for one paragraph relating to "sex changes," officials quickly deleted those sentences on Thursday. Still, as of Thursday afternoon, many of the changes that had been worrying activists remained.

The language about passport rules on the State Department website changed this week to use the word "sex" instead of "gender" (sex is what a doctor assigns you at birth, whereas gender is how you self-identify). With the changes, until the revision was revised in the middle of the day on Thursday, according to Rewire News, the FAQ section additionally stated, "The sex marker on your U.S. passport is based on your evidence of U.S. citizenship and identity, including a medical certification of sex change. The sex marker may not match the gender in which you identify."

The Daily Beast reached out to the State Department about the paragraph and quickly received a response in which the Bureau of Consular Affairs apologized for using the phrase "sex change" and said that the website page was being changed again "and should be live shortly." The update seems to have taken place now.

"We want to state unequivocally that there has been no change in policy or in the way we adjudicate passports for transgender applicants," an official from the department told The Daily Beast. "The Department of State is committed to treating all passport applicants with dignity and respect."

Still, the website appears to have maintained its usages of the word "sex" instead of "gender." According to Rewire News, it's also removed several links that had previously been listed to provide resources for medical transitioning. What with those changes, and the persistent lack of recognition of nonbinary identities, it's uncertain if walking back the "sex change" sentences in the FAQ section will satisfy trans advocates.

To understand exactly why that language is significant, it helps to know the recent history of U.S. passport rules. The rules have never — even prior to these website updates — been fully inclusive to LGBTQ people. But things used to be worse: Until recently, transgender people had to get a sex reassignment surgery before they could be issued a passport that matched their gender identity (which not everyone wants or can afford).

That changed with a 2010 court case. Even since then, though, U.S. passports have only given you two options for your gender: male or female. This is despite the fact that the International Civil Aviation Organization's guidelines say that "X," for undisclosed gender, is an acceptable alternative to "M" or "F," and the fact that many countries have adopted the use of an "X" option.

Lambda Legal sued the U.S. government over this issue in 2015, and the U.S. District Court for the District of Colorado ruled in the organization's favor. Despite the fact that it lost the case, the State Department has done nothing yet to add another gender designation option to passports. Lambda Legal has returned to court several times to reargue the case.

Fast forward to 2018 and the updated website language that said "a medical certification of sex change" was required to change your "sex designation." The National Center for Transgender Equality (NCTE) noted in a press release that the new language, despite how it sounded, didn't actually reflect a return to the pre-2010 standards that required trans people to get a sex change before receiving a passport matching their gender identity (either "male" or "female" — again, "X" has never yet been an option for U.S. passports). NCTE called the paragraph "needless."

Instead of indicating a policy change, NCTE argued that the new language is noninclusive, confusing, and could make it more difficult for trans people to navigate the processes of updating or renewing their passports. "While ultimately pointless, this move seems designed to frighten, confuse, and keep transgender people from exercising their full rights," director Mara Keisling said in the release. "Transgender people can and absolutely should continue to update and renew their passports. That is our right and that should always be our right."