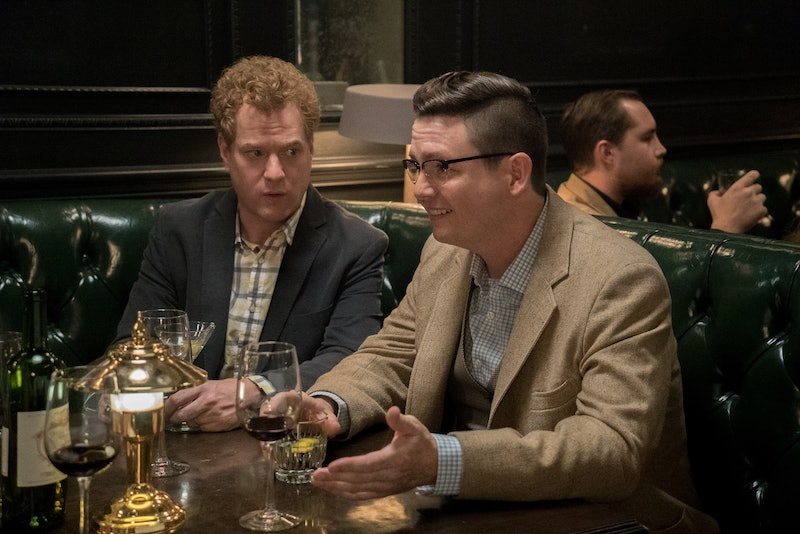 In Season 4, You’re The Worst has really been upping the ante of character development. (Spoiler alert for the Oct. 4 episode of You're The Worst.) Gretchen could be falling in love with another guy (Boone really isn’t so bad, as we find out this week); Jimmy has to finally atone for his sins; and Lindsay and Edgar are finding solace in each other. Even if they don’t date, having Lindsay and Edgar be the new best friends is more than enough. But there was also a dark revelation in the most recent episode — Paul is a men’s right’s activist on You’re The Worst after his breakup wit Lindsay. Paul, what happened to you?

Granted, the first three seasons had Paul married to or at least involved with Lindsay, who he adored. In the first two seasons of You’re The Worst, Lindsay was going along for the ride with Paul for the most part, just happy that she was married. It didn’t matter that she was suppressing a huge part of herself to be with Paul. It didn’t matter that he never asked her about what she liked or did what she did. He liked to bird watch, and she just went along with it. After a brief separation and a stabbing (Lindsay maintains Paul ran into her knife, her very own “Cellblock Tango”), Lindsay told Paul that she needed to be fulfilled in their relationship, too. And that meant her being allowed to have sex with different men in front of Paul. Then Lindsay got pregnant and had an abortion, and their relationship was over. Lindsay and Paul took turns playing the passive victim in their relationship, but by the end of things, it was obvious that Paul was going to take a turn.

Now, Lindsay is much happier living her own life, and Paul is… well, Paul is terrifying. In a tongue-in-cheek definition taken from Urban Dictionary, men’s rights activists "believe that despite global patriarchy, men are somehow oppressed." That pretty much sums up Paul now, and the writers of You’re The Worst have taken it upon themselves to make him the poster child of the men’s rights movement.

New Paul is exhausting! But it’s not over yet, because Paul has other diatribes that underline the basic tenets of the men’s rights movement. At dinner with Jimmy, Edgar, and Vernon, Paul goes into tangents like, “Men work harder. Men die earlier. But do we worry about men’s health? Did you know that 50% of domestic violence is woman-on-man?” Luckily, Jimmy responds with an “Absolutely not true” to that last bit. After hearing that Jimmy left Gretchen after he proposed to her, Paul says, “So Jimmy’s antics are vilified and yet Julia Robert’s antics in Runaway Bride are delightful and quirky. Nauseating.” The cherry on top of the misogynist sundae is, after Jimmy and Edgar leave, Paul says, “Whatever. Hey, let’s go run game on some creep-shaming lesbians.” Thankfully, someone punches him in the face right about then.

Paul’s MRA behavior is a complete 180 from the person he used to be, and it shows that Paul probably lacks a personality for himself. He used to be the gentle bird-watching type, and now, he mocks sexual assault and rape and wears a lot of vests, all while denouncing feminism. This can’t be a personality change — this is a guy who is grappling with the end of his marriage and the life that he knew and is just trying to find something else to cling to. Paul’s men’s rights activism streak is definitely just for now. Eventually, he’ll have to settle into something in the middle — it’s only now that he lost Lindsay that he needs to figure something else out, and this all has manifested itself into something terrible.

More like this
UK Viewers Will Have To Wait To Watch The Handmaid’s Tale S5
By Maxine Harrison
These Memes & Tweets About Alicent in 'House Of The Dragon' Prove She's The Queen Of Messiness
By Grace Wehniainen
How Much Are The 'Schitt’s Creek' Stars Worth?
By Hugh McIntyre
The ‘Kevin Can F**k Himself’ Season 2 Finale Twist Is A Full Circle Moment
By Grace Wehniainen
Get Even More From Bustle — Sign Up For The Newsletter