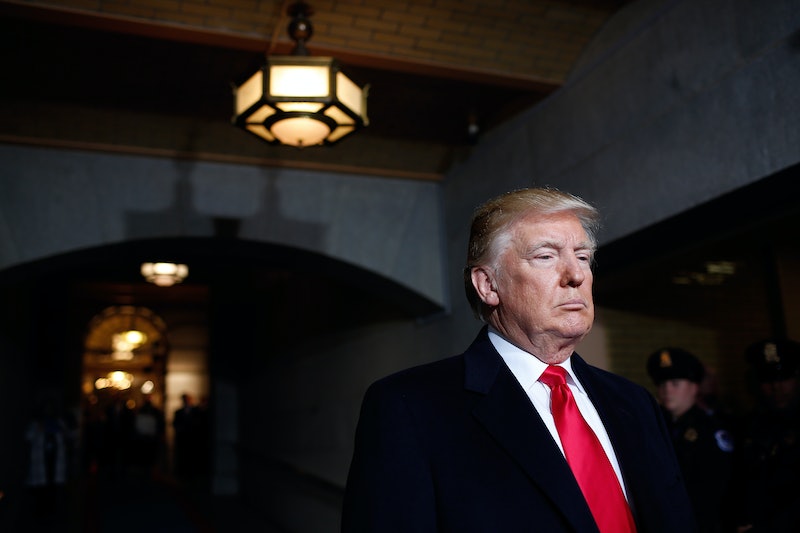 Well, this is one way to approach the inauguration. As he took the presidential stage, people were betting on what shade Donald Trump's skin tone is. And it's all thanks to Paddy Power Politics, an Irish company that stages bets on political events. It's one of those industries that makes you say, "That exists? Oh, wait, of course it does." There were 12 shades to choose from; "Deep Saffron" was at 6-1, while "Mahogany" was, understandably, at 18-1, just before the ceremony began.

While Trump has long been ridiculed for his hair, his orange-tinted tan also became a talking point during his presidential campaign. Mother Jones did a whole piece on it in the lead up to Election Day, as did Business Insider and Forbes. "He wanted to be painted orange, like bright orange," said SNL makeup artist Louie Zakarian said of Alec Baldwin in a behind-the-scenes video. Just after the election, the Guardian's Jess Cartner-Morley wrote, "Donald has a touch of Homer Simpson in the utter fictionality of his skin tone." Trump has addressed and defended his hair a number of times, but his tan seems to be something he's less willing to be open about. Today's wager on Trump's complexion shows that jokes about his orange skin aren't going anywhere now that "president" is officially his title.

Trump's skin wasn't the only aspect of the Inauguration people could bet on. Paddy Power Politics is also hosting gambling on how long Trump's speech is, the first time "Make America Great Again" is said, and U.S. viewership of the event, among other things.

With its bets and social media posts, Paddy Power Politics is taking open jabs at the new president. The site's past wagers having to do with Barack Obama struck more serious notes; people could bet on his Supreme Court nominees, his approval ratings, and whether or not he would win a second term.

Before Trump officially took to the inauguration stage, there was no indication yet of how the bet on his skin color would be settled. By the time the new president disappeared from the camera's view after the ceremony, the results had still not been released.

Humor and gambling are two of many ways people who are disappointed by the inauguration may choose to cope. At least one company is offering the intersection of the two. And with a bet already in place as to whether Trump will serve a second term or not, the gambling will continue long after he begins his first working day.

More like this
After The Bling Ring, Nick Prugo Was Embroiled In Another Scandal
By Arya Roshanian
How To Apply For 'Survivor' & Tips On How To Get Cast
By Meg Walters
Romance Authors Are Mobilizing For Reproductive Rights
By Natalia Perez-Gonzalez
New Coins Unveiled As King Charles III's Reign Gets Underway
By Sam Ramsden
Get Even More From Bustle — Sign Up For The Newsletter