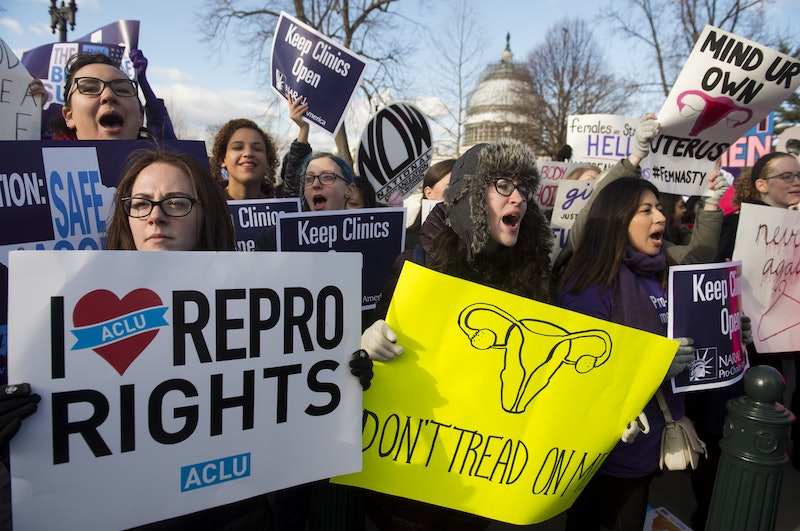 As Donald Trump's inauguration draws closer, the Women's March on Washington has been finalizing plans to protest the following day. Despite the general positive messaging behind the protest of opposing those who want to work against equality for women, recently there's been some division within the group. On Monday, differences in opinion about reproductive rights caused the Women's March to remove a pro-life sponsor from the event, and people are freaking out about where the march stands on abortion.

The group, called New Wave Feminists, a pro-life group in Texas, was initially granted partnership with the event, and profiled in The Atlantic. After receiving backlash from some on social media, the group was removed from the list of partners on the Women's March website. Organizers justified the decision, saying, "The Women's March platform is pro-choice and that has been our stance from day one. The anti-choice organization in question is not a partner of the Women's March on Washington. We apologize for this error."

Under the Women's March's Unity Principles, found on the website, the organization makes clear their stance on reproductive rights, saying:

We believe in Reproductive Freedom. We do not accept any federal, state or local rollbacks, cuts or restrictions on our ability to access quality reproductive healthcare services, birth control, HIV/AIDS care and prevention, or medically accurate sexuality education. This means open access to safe, legal, affordable abortion and birth control for all people, regardless of income, location or education.

Other sponsors include Planned Parenthood and NARAL Pro-Choice America Foundation, which are both very much pro-choice. Celebrities like Amy Schumer, Jessica Chastain, Uzo Aduba, and Zendaya plan to attend, along with an anticipated 200,000 people.

There's certainly some conflicting ideas in the news of eliminating an event partner. Some people say that a march for women should be inclusive, even to those who differ on some policies, but on the other hand, the whole point of the march is to advocate for women's rights, and those rights include access to abortion.

It's not like abortion access is a small part of feminism, it's a very essential aspect of feminists to fight for reproductive freedom. Yes, removing a group from sponsoring an event is a big step, but if that group's ideals don't actually align with the message of the event, then it completely makes sense not to include them.

Of course, pro-life women are not going to be barred from attending the event. Surely, many of them who identify as feminists will show up to tell Washington that women deserve equality, and they should. However, that doesn't mean that a pro-choice organization needs to be one of the event's sponsors. It deflects from the messaging presented by the organizers and the beliefs of 54 percent of women who are pro-choice.

Not all protestors at the march are going to hold the same beliefs, but the most important thing is that we all stand together to oppose measures from Trump's administration that would work to harm women.