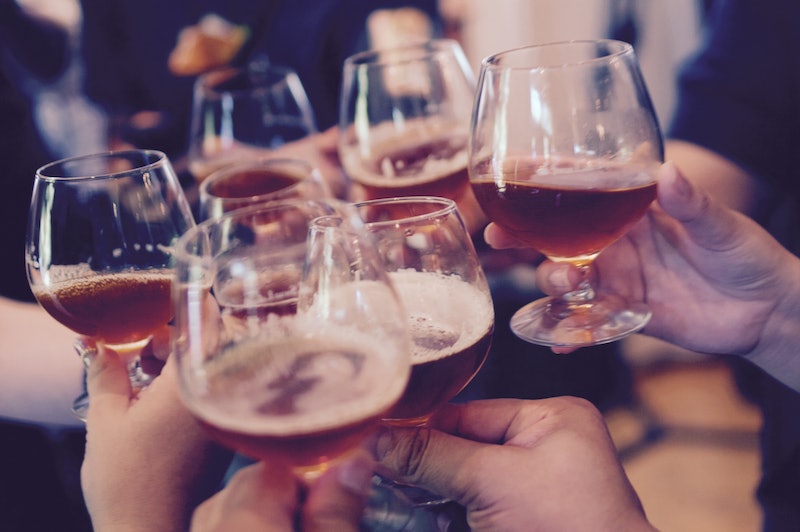 You’ve probably heard by now about Aurosa For Her, a Czech beer that calls itself the “first beer for her” — one that’s meant exclusively “for women,” and accordingly comes in pretty, marbled bottles with fancy script. The website describes it as follows: “Aurosa is a representation of a woman’s strength and a girl’s tenderness. The two contrasting tempers, present in the female essence, are depicted through the elegant design yet the strong, unfiltered taste.” Unsurprisingly, Aurosa For her been roundly mocked online; it should go without saying that people of all genders can and do like and drink beer, and that women in particular do not require special, pretty beer in order to enjoy a good brew. But the problem is not merely the existence of pretty beer; it all goes much deeper than that.

To be fair, I do kind of understand where Aurosa For Her is coming from; based on a message the brand posted on their Facebook page, the idea behind it was to try to counteract the rampant sexism running through the brewing industry and beer advertising. Reads the post:

Beer, wine or any alcohol has no gender. However, the beer industry is largely dominated by men. And culturally, even as more women enter the industry as brewers, pub owners, drinkers, beer can still pretty much feel like a masculine affair.

Statistically speaking, women are inclined to drink less beer. Why? Brewers, men and generally, the society have operated under the misconception that women do not like beer or that it is a man’s drink. This has been rendered into the media and the marketing system. The tasteless and sexis tmarketing that brewing companies use illustrates that point clearly.

Aurosa was never intended to take part in sexism, feminism or the like. It was never intended to dictate what women should or shouldn’t drink. We are simply a brand that wants to offer beer in an elegant and beautiful bottle, something that has not been done before, for those women who want it and who’s [sic] lifestyle we fit.

Aurosa For Her is not, in fact, the first “beer for her”; various attempts have been made in recent years to market women-targeted brews. Nor are women “statistically speaking… inclined to drink less beer”; as Extra Crispy pointed out, one 2016 study found that in the United States, women actually drink more beer than men do — they constitute 51 percent of U.S. beer drinkers, while men comprise 49 percent. (The study is flawed in that it doesn't include people of all genders, though, so bear that in mind.)

Aurosa is, however, absolutely right that sexism in the industry and in advertising is a problem; just a glance on common ad campaigns and beer names is enough to drive that point home. (Read all this. Also this. And remember this gem from 2015? Good times. In that really, really, not good kind of way.) They’re also right that something needs to be done about it. But this? This is not it.

As I noted earlier, the problem isn’t pretty beer in and of itself. The problem is that marketing these kinds of beers as “for women” reads not as inclusive, but as an extremely weak attempt to undo years of sexist advertising — and the way they’re doing it is somehow just as offensive as the original advertising was in the first place. To underline this point, Jelisa Castrodale over at Vice’s Munchies pointed to an observation Melissa Cole made in The Guardian back in 2011 while reviewing another “beer for women”:

Big breweries need to ask themselves why more women don't drink the beers they are already selling – and the answer is that they have busily been disenfranchising women from the beer market for the past 40 years and are now clumsily trying to entice them back. It's the business equivalent of someone breaking up with you horribly at school, only to beg you to comeback in your mid-30s.

The metaphor, I feel, is apt.

This isn’t to say that femininity can’t be part of a beer’s identity. Take High Heel Brewing, for example — a brewery run by women whose logo features the spike of a high heel topped with a hops flower. As owner Kristi McGuire recently told Eater’s Morgan Childs, High Heel isn’t meant to be “exclusively for women”; indeed, it’s intended to be inclusive, simply with a brand identity that reflects the fact that it’s owned and operated by women. “Just as some craft brewers showcase their beards as part of their image, I am showcasing being a confident woman in the brewing industry,” she said. Nowhere in the beer’s product copy on the High Heels website does it specifically gender itself,and although the logo features a stiletto heel, the image itself is actually quite abstract and gender-neutral.

This, I think, is an excellent point. High heels and overt femininity don’t, of course, have to be the only visual cues associated with a woman-led brand identity; reducing the idea of “woman” down to these things alone merely cleaves to the constraints “traditional” gender roles like to place on us. However, to say that high heels and overt femininity must be outright rejected is equally problematic. Women — and people of all genders — should be free to like these things and others like them without fear of being shamed, the same way they should be allowed to dislike or feel indifferent about them without fear of being shamed, either. It is, as always, about choice, and having the freedom to choose what works best for you.

Where I think Aurosa goes wrong is in its broad assumptions about what women are. Take another look at the way it’s described on the beer’s website:

Aurosa is a representation of a woman’s strength and a girl’s tenderness. The two contrasting tempers, present in the female essence, are depicted through the elegant design yet the strong, unfiltered taste.

The product copy goes on to state that the beer “was destined for sophistication and elegance,” meant to “prove that women can succeed anywhere without having to adapt and sacrifice their natural femininity.”

While it finishes off with the idea that “she [the beer — yes, they used a gendered pronoun to refer to it] is here to celebrate femininity in all forms,” nearly every sentence that precedes this statement focuses on just one form of womanhood. It portrays “the female essence” as a monolith; that this monolith must necessarily contain “a woman’s strength and a girl’s tenderness”; that “sophistication, “elegance,” and “grace” are all always part of being a woman; that women all have “natural femininity.”

But there is no such thing as “the female essence”; everyone who identifies as female has their own unique "essence." These essences can include “strength,” “tenderness,” or both, but don’t necessarily include them. Nor are all women “sophisticated,” “elegant,” and “graceful” — they can be, but they don’t have to be any or all of them, either. And as for all women having a sense of “natural femininity?” Again, womanhood is not a monolith. It's OK to be "naturally feminine," and it's OK not to be "naturally feminine." There are as many ways to be a woman as there are women in the world, and none of them are "better" than any others.

The kicker is that most these qualities are not actually gendered by default. Our culture is what genders them. And maybe this is just me, but I don’t think counteracting decades — centuries, even — of sexism in brewing and beer advertising is to make it more gendered. How about, instead, we make it less gendered? And this goes for all beer, not just the ones that are so deeply entrenched in traditional masculinity so as to be off-putting at best and downright objectifying at worst for anyone who doesn’t identify as traditionally masculine. Pretty beer can be great — just, y’know,maybe don’t make it pretty beer for women. Make it pretty beer for people who just like pretty beer.

For what it’s worth, Aurosa For Her is apparently pretty good; as Morgan Childs wrote at Eater, although she “wanted to dislike Aurosa… it is, as beers go, perfectly drinkable, distinctive and floral and not at all sweet.” But, y’know, enough with the unnecessary gendering — on all sides of the table. If it tastes good, and you like it, that’s all that matters.