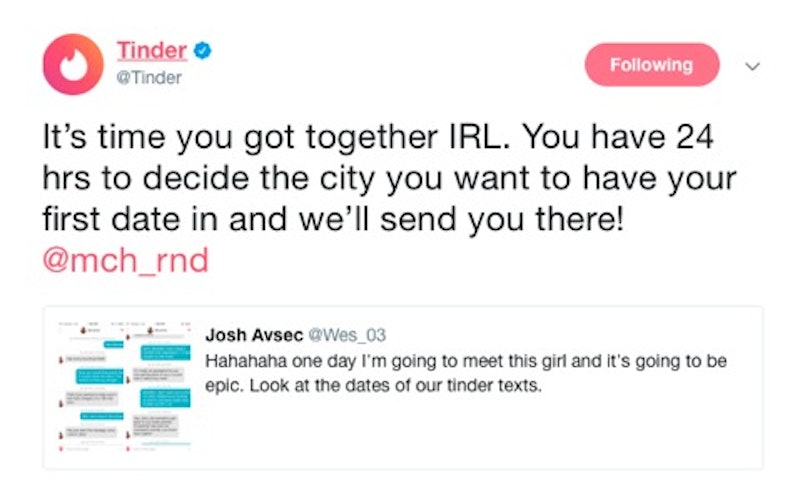 It's a tale as old as time. Boy and girl swipe right. Girl and boy keeping running joke going for three years but never meet IRL. Internet goes wild over boy and girl. And then Tinder sends boy and girl to Hawaii. Confused? Don't worry. Meet Josh Avsec and Michelle Arendas, who both go to Kent State University in Ohio. Basically, they matched on Tinder and took a liking to each other.

"Tinder was super new at the time for my whole friend group. At the time I had matched with a whole bunch of girls and I took it as a joke," Avsec told Buzzfeed. "I sent [them] some pretty humorous lines... And then I bumped into Michelle. She seemed a little different, so I sent her something different."

And from that, a running joke was born. So if you look at their messages back and forth, it doesn't seem that unusual — just a bit of a running joke about how flaky they're both being. But look a little closer. Look at the dates of the Tinder messages — you'll see a devotion to an inside joke that goes way beyond the ordinary. Hell, it shows the commitment of a long-term relationship. Take a look:

It's been going on for years. For three years, in fact. And then what happened? Well, the internet got involved, as the internet likes to do. People love them. There's this guy who offered to buy them a drink:

And there were a whole lot of people who were just dying to be the third wheel when they finally did meet:

Some Twitter fans want them to tie the knot already.

And this man who basically summed up how all of us feel:

They told Arendas and Avsec to pick a city and they would make it happen. So they are currently in the works to send them to Hawaii. And it seems like the pair could not be more excited about it. Seriously, both of them are totally blown away by their newfound internet fame and seem like really likable, genuine folks who just happened to go viral.

So if you are starting to feel a bit lackluster about your online dating life, you may just want to keep at it. Because with a good enough sense of humor, anything can happen — even a free trip to Hawaii set up by the OG of dating apps. Good luck, you two crazy kids, and having an amazing time in Hawaii. No excuses.