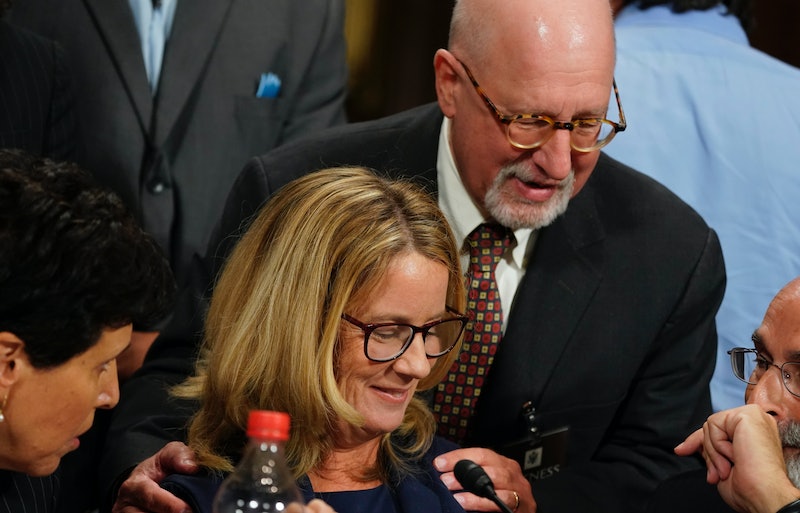 In one of the most highly-anticipated congressional hearings in years, Dr. Christine Blasey Ford testified in front of the Senate Judiciary Committee Friday about Supreme Court nominee Brett Kavanaugh, who she says sexually assaulted her when she was 15. After delivering a very emotional testimony, Ford stood up to leave the Senate — and several people in the audience shouted "thank you, Dr. Ford" as she did.

Ford alleges that at a party when they were teenagers, Kavanaugh pinned her to a bed, groped her, attempted to remove her clothes, and pressed his hand against her mouth so she couldn't scream. Kavanaugh has categorically denied the allegations, and also denies additional accusations against him that have been made since Ford came forward.

"I am here today not because I want to be," Ford said during her opening statement. "I am terrified. I am here because I believe it is my civic duty to tell you what happened to me while Brett Kavanaugh and I were in high school."

Many Republicans and Kavanaugh defenders cast doubt on Ford's story by questioning why she didn't go public with her allegation sooner. In reality, there are many reasons why survivors of sexual assault don't come forward until weeks, months, or years after the fact. Ford said during her testimony that "Brett's assault on me drastically altered my life," and spoke about how difficult it was her to come forward with her allegation against him.

"For a very long time, I was too afraid and ashamed to tell anyone the details," she said. "I did not want to tell my parents that I, at age 15, was in a house without any parents present, drinking beer with boys. I tried to convince myself that because Brett did not rape me, I should be able to move on and just pretend that it had never happened." Ford also said that she's received "constant harassment and death threats" as a result of making an allegation against Kavanaugh, leading her to have to move out of her home.

During his questioning, Sen. Cory Booker thanked Ford for coming forward despite all of this, and called her "heroic" for doing so.

"There are hundreds of thousands of people around the country watching your testimony right now, and people in tears feeling pain and anguish — not just feeling your pain but feeling their own, who have not come forward," Booker said. "You are opening up to open air hurt and pain that goes on across this country. And for that, the word I would use, it's nothing short of heroic."

Kavanaugh delivered his testimony to the Senate after Ford, and was defiant in doing so. He vehemently denied the accusations against him, denounced what he called an "effort to destroy [his] good name" and referred the confirmation process as "a national disgrace."

"This whole two-week effort has been a calculated and orchestrated political hit fueled with apparent pent-up anger about President Trump and the 2016 election," Kavanaugh said, "fear that has been unfairly stoked about my judicial record, revenge on behalf of the Clintons, and millions of dollars in money from outside left-wing opposition groups." He presented no evidence that Bill or Hillary Clinton played any role in the accusations against him.