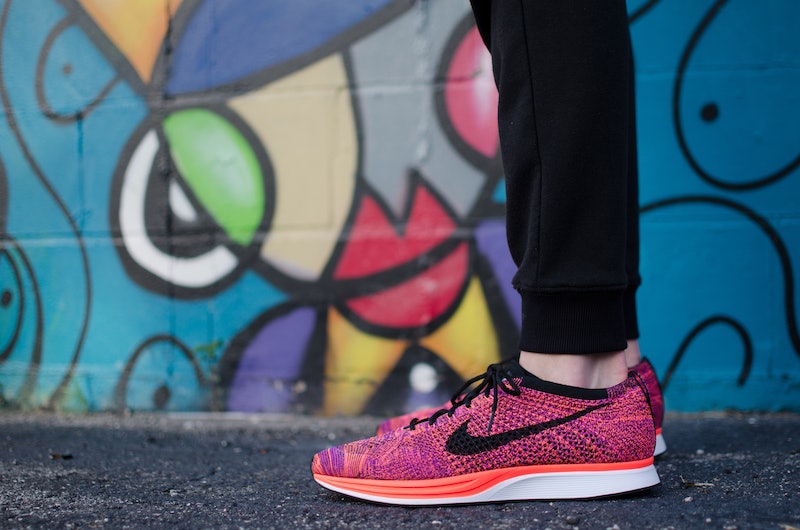 I'm sure you remember the agonizing that flooded many timelines over "the Dress," also known as Dressgate or #TheDress. It was everything from "OMG, are you blind" to "I usually don't have an opinion on these things, but it's definitely [insert color]." It was madness! So when this Nike outfit people are calling the new "Dress" surfaced, its viral moment was reminiscent of a time in 2015 where we all argued over the color of a dress. Now, dear social media users, the debate has shifted to a pair of slippers, a tank top and shorts.

Thanks to a woman named Rachel Stewart from the U.K. who posted about it on an Australian blog called mygc, there was plenty to talk about. Other sites like BuzzFeed even started a poll where about 52,000 people believed the new outfit is teal and gray, and almost 24,000 see pink and gray (with another 3 percent convinced that everyone else is crazy). But for the most part, people just wanted to make themselves heard on the matter.

The outfit in question has reached over 500 comments from the initial post on the Australian site, and has become a conversation without borders:

Some of the responses ranged from candid declarations to elaborate thought out responses.

And on Facebook, the comments continued to prove that it didn't matter what color it was. It mattered more about how soon they could place an order and if it included shipping. Oh, millennials.

When I say elaborate comments, I also mean that after reading, you may feel even more confused on where exactly the conversation is going:

And the intensity of the comment or argument for what color this outfit was gets more interesting as you scroll:

It seemed like the internet was back at it again and making us see all sides of the story until a clothing brand called BiNorth Collection swooped in to offer some clarity. The clothing brand stated on Facebook in a caption, "Hey guys, this is blue and gray, NOT pink and blue."

If we are all offering our two cents, I would vehemently disagree with the word "blue" and side with the many commenters who used the word "aqua." And in all honesty, this small phenom could also become a philosophical think piece about world view and deviance on the web. But while we wait for how the rest of social chooses to respond, you can just stop at whether or not this outfit will break the bank.

With this random viral moment unfolding on your feed it looks like you can't buy pieces of this outfit at the moment. But you can grab the whole look for $120 and more than welcome to add your two cents about that, too.