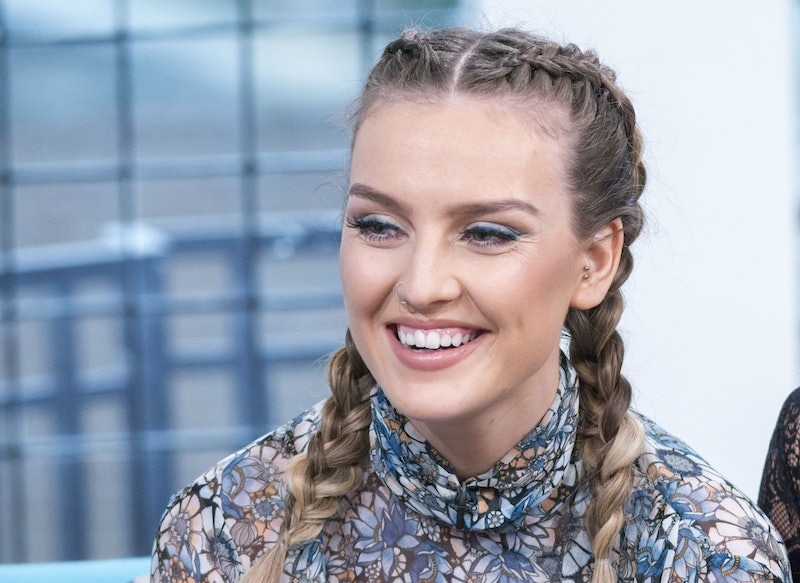 It doesn't feel all that long ago that the world didn't know how to openly speak about mental health. But with a flurry of campaigns in recent years, as well as celebrities starting to open about their own experiences with mental health, the subject now seems like something that's spoken about more and more (though there's still a long way to go, of course). One Little Mix member is also helping the cause, as Perrie Edwards has opened up about her anxiety in her first solo interview, and she doesn't sugarcoat her experience. Edwards' interview is another necessary addition to the growing conversation on mental health.

Uploaded to Glamour UK's YouTube channel on Wednesday, May 1, Edwards' first interview without the "comfort blanket" of the Little Mix girls, as her interviewer put it, was a seriously honest account of her experiences with anxiety.

It followed her emotional Instagram post, uploaded in April 2019, in which Edwards told her followers: "I’d like to open up about something. Venting your feelings is healthy and I want to be honest with you all. Over the past few years I have suffered really badly with anxiety and panic attacks."

While she'd detailed some of her own experiences with anxiety in that post, she opened up about it more to Glamour UK, going back to when it first began. "When it first started happening to me, it felt like it had happened to no one else ever before," Edwards said. She continued:

"I think I've always had anxiety, but I don't think it was triggered in a way to cause a physical attack, so when it first started happening to me [the panic attacks], it was just so scary, because I didn't know what was going on. I was ringing doctors, I was ringing everyone, like, "I'm dying," "I've just had a heart attack and survived it."

It took her some time to come to terms with her anxiety, but hearing stories from celebrities about their experiences with it encouraged Edwards to begin talking about it, as she told Glamour UK:

"I looked into it and I noticed that Ellie Goulding came out and said that she had anxiety and she couldn't get into the car to the studio, and I read that Fearne cotton was on the motorway in her car and she had a physical attack, and it started to make me feel a bit more normal. I'm a totally different person to what I was a year and a half ago."

Now, Edwards says that talking to other people about it "is the best feeling in the world," she said in the interview. Therapy helped her hugely, and she revealed that her dog Hatchie has also been a big boost in getting her to where she is today — thriving, opening up to people, and feeling optimistic for the future. But most of all, it seems as though Little Mix and her fans have been the biggest support for her. Edwards told Glamour UK:

"If I didn't have three girls to think about and be strong for, and all the fans that wanted to see the show be the best it could possibly be, I don't think I would have come back to work."