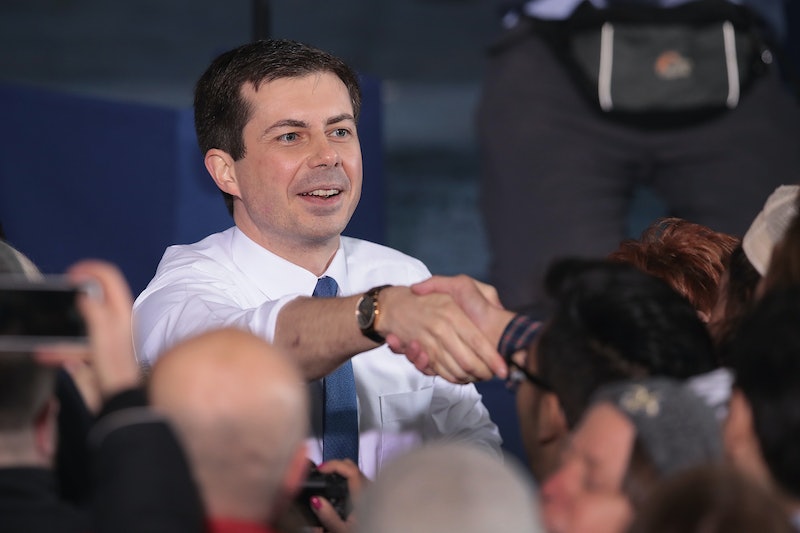 As he barnstormed Iowa for the first time as a declared presidential candidate, South Bend Mayor Pete Buttigieg was heckled by anti-LGBTQ protesters at several campaign events, CBS News reports. But Buttigieg, who's openly gay and married, is taking the interruptions in stride, and told reporters later that he takes the heckling as a sign of his ascendancy in the Democratic primary.

"Mayor Pete, you betrayed your baptism, your holy baptism," one of the hecklers shouted at an event in Fort Dodge on Tuesday, according to NBC News. At a larger rally in Des Moines later in the day, protesters shouted "remember Sodom and Gomorrah!" to which Buttigieg replied, "hello, again."

In response to the heckling in Des Moines, Buttigieg told the crowd, "The condition of my soul is in the hands of God, but the Iowa caucuses are up to you."

Two protesters told NBC News that they plan to protest Buttigieg's homosexuality, as well as his support for abortion rights, at his campaign events in the state. On Wednesday, a third man heckled Buttigieg at a house rally in Marshalltown, according to NBC News. One of the hecklers dressed as Buttigieg and whipped another, who was dressed as Jesus, while the third protester wore a Satan costume and spouted anti-gay remarks, NBC News reports.

"Well, the better we do, the more that's gonna happen, so I take it to be a barometer of success. Just something that we have to prepare for, along with all the other things you have to be ready for when you reach the top tier," Buttigieg said. "I think when you're in politics, especially at this level, you're gonna see the good, the bad, the ugly, and the peculiar. That's just part of how it works, and you've gotta be prepared for that."

Buttigieg, who would be the first openly gay president if he won, has discussed his sexual orientation, and the road he took to embracing it, during his campaign for the Democratic nomination.

"You know, there's this war that breaks out, I think, inside a lot of people when they realize that they might be something they are afraid of," Buttigieg told Rachel Maddow. "And it took me a very long time to resolve that. I did make sure as a kind of final way of coming out to myself to come out to at least a couple of people in my life before I took office because I knew that I didn't want that psychological pressure, of at least not being out to somebody."

While addressing the crowd in Des Moines, Buttigieg said that, while Democrats must denounce bigotry of all kinds, his party also must acknowledge the factors that lead people to embrace bigoted views in the first place.

"We’ve got to acknowledge — without giving an inch on the racism or xenophobia that played a role in that campaign — we’ve got to also pay attention to the things that make people susceptible to that message and make sure we’re addressing them,” Buttigieg said, according to the New York Post.