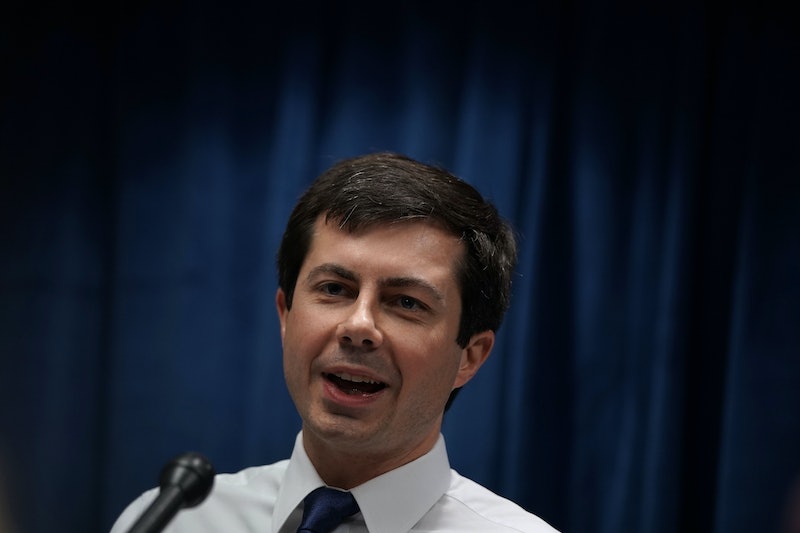 What a morning for the 2020 candidate and mayor of South Bend, Indiana. On Monday, Pete Buttigieg officiated the wedding for a couple — just hours before they had their baby. The Democrat, an openly gay Afghanistan veteran who announced his bid for the 2020 race in January, shared the anecdote with his Facebook followers.

"I never would have guessed how this morning would begin for me," Buttigieg wrote on Facebook. "Unstructured time is rare especially these days, but I got to the mayor's office early today after my morning run, and took a few minutes to read the news and answer text messages before my first meeting."

The Indiana mayor wrote that he was headed out to the restroom when a couple, Gabe and Mary, bumped into Buttigieg and asked if he had a moment to talk to them. "Reluctantly, I showed them in to the front part of our office and promised someone would try to take care of whatever their issue was," Buttigieg wrote in his post.

It was then that Gabe and Mary informed Buttigieg that they wanted him to officiate their marriage, according to his Facebook post. He wrote that he gathered staff members to act as witnesses and, in a detail that is certain to be heartwarming to his readers, Buttigieg added that one of his staff offered a ribbon in place of a ring, since Gabe and Mary did not have one.

Buttigieg's unexpected and rather sweet participation in the couple's marriage could add even more appeal to his public portfolio, which already has some noticeable elements to it. In fact, one of the most notable aspects about the Democrat's political resume is his age. Buttigieg is, after all, only 37 years old (like Hawaii Democratic Rep. Tulsi Gabbard).

The South Bend mayor and 2020 presidential hopeful has been sure to put emphasis on his relative youth as well. In January, Buttigieg told The Atlantic's Edward-Isaac Dovere, "If you’re my age or younger, you were in high school when the school shootings became widespread, you’re going to be dealing with climate change for most of your adult life in specific, noticeable ways."

"You’re going to be dealing with the consequences of what they’ve done to the debt, you’re on track to be the first generation ever to make less than your parents, unless something changes," he added in The Atlantic interview.

By officiating Gabe and Mary's wedding right in his office, Buttigieg may have won over fans not only in Indiana but also across social media. "Gabe and Mary, newly married, left my office with just enough time to get to the hospital," Buttigieg wrote on Facebook. "And a few moments ago, they sent Mark in my office this photo of Gabe with young Jade Katherine Jones, South Bend's newest resident.

Speaking candidly, Buttigieg added that it was "moments like this that I'll miss when my term as mayor comes to an end." And as for the couple's newborn, the native Hoosier wrote: "Welcome, Jade, to this unlikely and lovely world!"