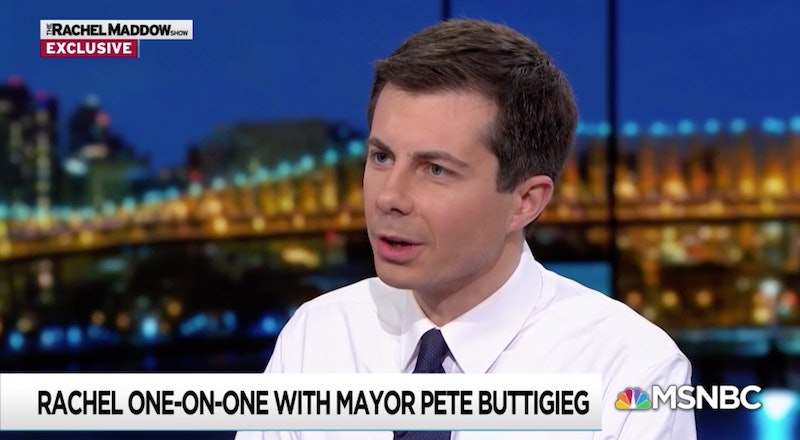 The first openly gay presidential candidate to viably compete for the Democratic nomination was interviewed by an LGBTQ media personality on MSNBC Monday night — and they tackled coming out. Presidential hopeful and South Bend Mayor Pete Buttigieg told Rachel Maddow why he came out at 33, and what it was like to accomplish so much while he was living in the closet.

Acknowledging it was a "difficult question," Maddow said she was not saying it was a "bad thing" Buttigieg didn't come out until he was 33. "I think it would have killed me to be closeted that long," she continued. "I just wonder if that was hurtful to you? If it hurt you to do it?"

"It was hard, really hard." Buttigieg responded to Maddow.

"Coming out is hard, but being in the closet is harder," she offered back.

"I guess I just really needed to not be," he said. "There’s this war that breaks out inside a lot of people when they realize that they might be something they’re afraid of, and it took me a very long time to resolve that."

Buttigieg said that despite there being "plenty of indications" in retrospect, he did not realize he was gay earlier in life like Maddow, or his husband, Chasten Glezman, who according to Buttigieg on MSNBC, had come out earlier. As a teacher, Glezman has used Twitter to be an advocate for coming out when you're ready.

Buttigieg said he did realize it, however, before he ran for mayor in 2011. "I did make sure, as a kind of final way of coming out to myself, to come out to at least a couple of people in my life before I took office because I knew that I didn’t want to have that kind of psychological pressure of at least not being out to somebody," he said.

When he came out to these friends, Buttigieg says they pointed out he "hadn't really made it easy" on himself because at that time he only had two things that "mattered to him professionally": being an officer in the military — where "don't ask, don't tell" was still in effect — and his tenure as mayor of a small town in Indiana. "Both I assumed were totally incompatible with being out, and both of which were meaningful," Buttigieg said.

"I did get a lot of meaning from that work, and in some ways because it was so demanding, I almost didn't mind — for an inordinately long time — that I didn't have much of a personal life," Buttigieg continued. "And I did not have a dating life while I was closeted."

It was after his deployment to Afghanistan in 2014 that he finally decided to come out publicly. "I realized that you only get to be one person," he told Maddow. "You don’t know how long you have on this earth. And by the time I came back, I realized, 'I gotta do something.'"

In 2015, Buttigieg came out via an essay in the newspaper. Later that year, he won reelection with 80% of the vote. "No executive in Indiana had ever been out. It was kind of a leap of faith," he told Maddow.

"Don't get me wrong," Buttigieg added. "As you know, there's plenty of ugliness that comes in from all over the place. Most people I think are either supportive or even enthusiastic about the idea of the first out person going this far. Or they find a way to let me know they don't care, and that's historic, too."

Buttigieg officially announced his candidacy at a rally in South Bend on Sunday.