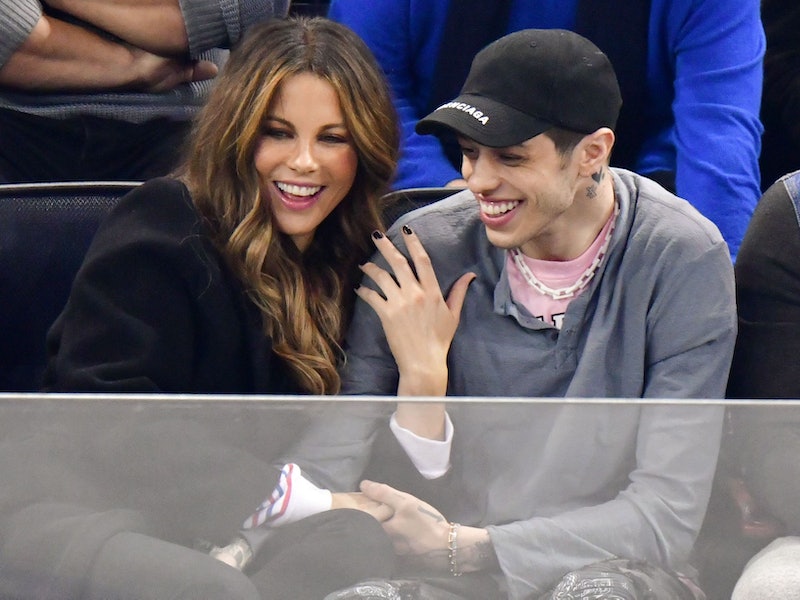 Just when people were starting to get on board with the Pete Davidson and Kate Beckinsale romance rumors, they might actually be over. Davidson and Beckinsale reportedly really broke up, according to Us Weekly, and it also sheds some light on recent headlines about the comedian.

An Us Weekly article on May 1 quoted a source who claimed, "They are done." Previously, a different source told the magazine that Beckinsale and Davidson "pumped the brakes on their relationship," but they were "still spending time together but [it was] less serious: more friendly of a vibe and less romantic." (Similar reports circulated on People last week, claiming that Beckinsale and Davidson "decided to slow things down a bit.")

If they are really done for good then that would add more context to why the Saturday Night Live star left a Connecticut venue before he was set to perform a stand-up set on April 29. According to an article from BuzzFeed, the comedy club owner went on stage to introduce Davidson and warned the audience not to ask about Ariana Grande and Kate Beckinsale.

That might seem like a nice gesture to avoid awkward conversation topics, but the comedian did not take it that way. This is because he claimed he specifically asked the owner not to do that. Plus, if he's going through a fresh breakup, having multiple exes' names mentioned on stage is understandably uncomfortable (even if they're brought up with good intentions).

After he left the club, Davidson shared his side in an Instagram Story video on Monday night. He told his followers,

"The owner, Vinnie Brand, disrespected me, and did something I told him not to do, and I can't perform under those circumstances."

He also said, "Hey, you guys in Connecticut, I'm sorry we had to leave the show before I got to go on." Davidson even promised to reschedule with a free show for all of the people who bought tickets for that night's event. Meanwhile, the owner told Entertainment Tonight that he would never disrespect Davidson and that he was simply following a request from security. What exactly happened in the situation is still a little unclear.

Just a few days before that scheduled show and subsequent walkout, rumors that Davidson and Beckinsale split really started to pick up. This was because the PDA-heavy pair hadn't been spotted together in a minute. Still, pulling back on the PDA isn't a definite indication of a split. If anything, it just could've been an effort toward privacy. Ultimately, their status was just so unclear. And, truthfully, it still is. (Bustle previously reached out to reps for Davidson and Beckinsale about split reports, but did not hear back.)

On April 24, an inside source told Entertainment Tonight that Beckinsale and Davidson are not together. This person said, "They’re still friendly, but are not on romantic terms." That same day, a seemingly different source spoke to People about Beckinsale and Davidson's current relationship. That source claimed, "Pete and Kate got super serious very fast but they’ve decided to slow things down a bit." What does that mean exactly?

Neither Davidson or Beckinsale have officially confirmed a breakup themselves. Instead, the information is just from unnamed "inside sources," so it's tough to know what's actually true at this point in time. The fascination with both of the celebrities' love lives is at an all-time high. They'll likely address their status at some point with an interview comment, social media post, or a public makeout, right?

More like this
Dixie D’Amelio & Noah Beck “Love Each Other” Despite Breakup Rumors
By Julia Emmanuele, Jordyn Tilchen and Grace Wehniainen
Hailey Bieber Just Responded To *That* Viral Met Gala Moment
By Radhika Menon and Sam Ramsden
Khloé Kardashian Is Reportedly Dating A Private Equity Investor She Met Through Kim
By Jordyn Tilchen and Jake Viswanath
The 'Love Island' Wedding Mystery That No One Saw Coming
By Darshita Goyal
Get Even More From Bustle — Sign Up For The Newsletter