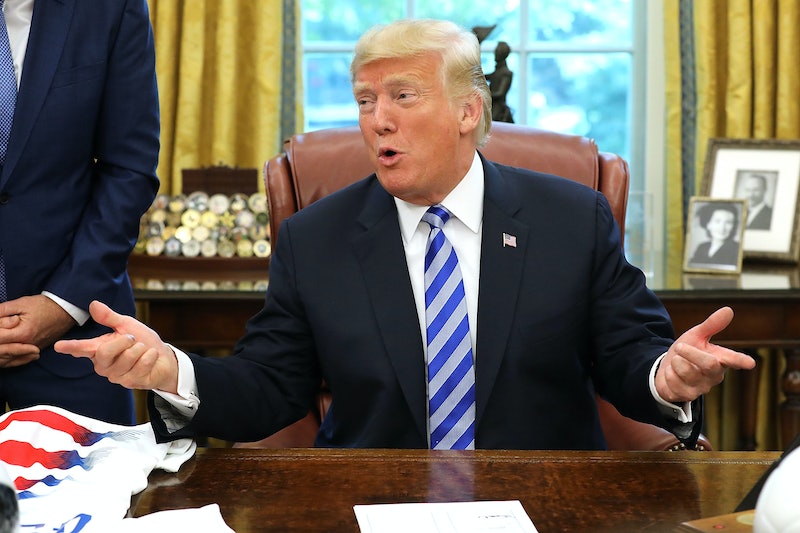 If presidential trolls had rankings, then Obama's White House photographer would certainly be on the leaderboard. After reports emerged on Bob Woodward's new book claiming that Trump's top aides stole documents from the Oval Office to "protect the country," Pete Souza mocked Trump with a photo of Obama's desk.

Alluding to Woodward's claims in his Instagram post on Tuesday, Souza's picture shows a desk laden with stacks of paper. "As the saying goes, the only sure things in life are death, taxes and that no one will ever steal papers from the desk of the President of the United States. Oh wait..." Souza wrote, next to the emoji with sunglasses and the hashtag #throwshadethenvote.

According to People, aides sneaked important papers off of Trump's desk because they were concerned that Trump's unpredictable behavior could endanger the country. The White House was quick to respond to allegations from Woodward's book, with White House Press Secretary Sarah Sanders sending out a statement that said the claims were "fabricated."

“This book is nothing more than fabricated stories, many by former disgruntled employees, told to make the president look bad,” the statement said. “While it is not always pretty, and rare that the press actually covers it, President Trump has broken through the bureaucratic process to deliver unprecedented successes for the American people.”

“Sometimes it is unconventional, but he always gets results," the statement continued. "Democrats and their allies in the media understand the president’s policies are working and with success like this, no one can beat him in 2020 — not even close.”

The president also denied the claims made in the excerpts from Woodward's book Fear: Trump in the White House in an interview with The Daily Caller. He specifically addressed the portion accusing aides of sneaking papers off his desk, calling the stories "false" and pointing out “there was nobody taking anything from me” to the conservative news outlet.

“It’s just another bad book. He’s had a lot of credibility problems,” Trump said to The Daily Caller. “I probably would have preferred to speak to him, but maybe not. I think it probably wouldn’t have made a difference in the book. He wanted to write the book a certain way.”

In a tweet on Tuesday, Trump stressed that top members of his administration had refuted the stories about him before going on to question whether Woodward was a Democrat operative.

“It’s just nasty stuff. I never spoke to him. Maybe I wasn’t given messages that he called," Trump said in the Daily Caller interview. "I probably would have spoken to him if he’d called, if he’d gotten through. For some reason I didn’t get messages on it.”

Woodward's book is set to come out on Sept. 11, though his isn't the only one critical of Trump to hit shelves in the fall. Souza also has a book on its way titled Shade: A Tale of Two Presidents, slated for publication on Oct. 16, according to The Washington Post. Souza's book likely won't wield the investigative prowess of Woodward's work, but there's little doubt it'll have the same snarky shade dropped throughout his social media.

More like this
The Most Anticipated Books Of October 2022
By K.W. Colyard
10 New Must-Read Books Out This Week
By K.W. Colyard
Twitter Is Saying The Same Thing About Thomas’ Outburst On 'MAFS UK'
By El Hunt
12 Must-Watch Documentaries To Honour Black History Month UK
By Sophie McEvoy
Get Even More From Bustle — Sign Up For The Newsletter