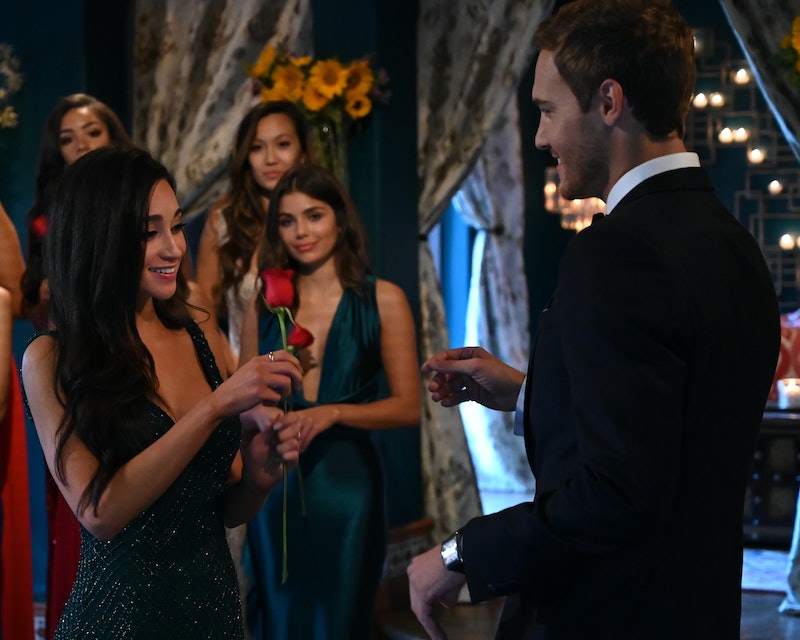 Victoria F. is the first contestant on to earn two one-on-one dates from Peter, but their relationship isn't smooth sailing. Peter admitted he has doubts about Victoria F. on The Bachelor after their date, and the pilot should probably listen to his instincts in this situation. The pair got off to a rocky start (let's not forget her awkward entrance joke), but ever since the fashion show group date, Peter has shown that he has strong feelings about Victoria F.

However, while he was confident in their potential relationship, Victoria had doubts — a lot of doubts — about everything. After the fashion show, she confessed to Peter that "I don't think I'm made out for this," explaining that she didn't feel like she could compete with the other women in the house. Then, her one-on-one date in Cleveland took a very dramatic turn when she had to tell Peter that she used to date country star Chase Rice, who performed a private concert for them, even running away in tears at one point.

By the time they got to her second one-on-one in Chile, Victoria broke down crying and confessed that she didn't think she was ready to be married by the end of the show. While Peter was shaken by her insecurities about their relationship and the fact that she keeps pushing him away, he was determined to keep her around, and gave her what he called "the most telling rose" at the end of the night. Still, he confessed that he has doubts about their relationship.

To be fair to him, that's not a shocking: In addition to her confession about not being ready for marriage, Victoria admitted to producers that she continues to sabotage their relationship by constantly questioning things. "It's not fair to him," she said tearfully, but her doubts about being on the show might be proof that these two aren't meant for each other. After all, she has run away from him crying on three separate occasions, and she keeps preventing them from bonding because she's scared to open up to him.

"Nobody else has put me through anything like this," Peter told Victoria, before telling the cameras that their relationship is the only one where he feels like he's more invested than her. If that's the case — and if Victoria really isn't sure about being on the show — why keep forcing it? Sure, The Bachelor isn't the most normal way to find your life partner, but any relationship that is so difficult in the beginning stages, when you're just getting to know each other, can't be worth the long haul.

Based on the preview for the next episode of The Bachelor, it seems like Peter's doubts about Victoria will continue to play a role in their relationship. And with things going so well for him and some of the other women, that could mean that Peter and Victoria's relationship might not hang around for much longer — and that might be for the best.

More like this
Wait, Did Nate Actually Turn Down Being The Bachelor?
By Kadin Burnett
Why Did Lace's Fake Her Birthday On 'Bachelor In Paradise'?
By Kadin Burnett
Here's Exactly When Rachel & Tino's Fight Happened After 'The Bachelorette'
By Grace Wehniainen
Where Is Former Bachelor Host Chris Harrison Now & What Is His Net Worth?
By Hugh McIntyre
Get Even More From Bustle — Sign Up For The Newsletter