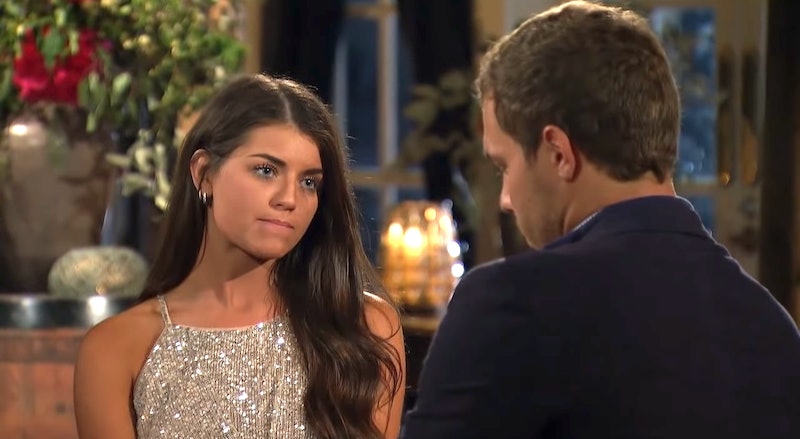 As expected, the Fantasy Suite dates on The Bachelor marked the potential undoing of Madison and Peter. After telling Peter that she would struggle to continue if he slept with Hannah Ann or Victoria F., Madi walked away from him — and potentially the entire series — when Peter revealed he had been intimate during the other dates. While he appeared heartbroken, Peter is defending Madi's Fantasy Suite decision, claiming that Madi didn't give him an "ultimatum," despite fans' insistence to the contrary.

"I don't feel like it was an ultimatum. I don't," Peter told Entertainment Tonight. "I think it was her doing what I asked every girl to do from the very first night and that was to be honest with me and share what was ever on their heart. And that's what she did."

In the episode, Madi made clear that she didn't intend to give Peter an ultimatum, telling him, "The last thing I wanted to do was put you in an uncomfortable position or make it seem like it was this ultimatum." But, as she made very clear during the dinner portion of their Fantasy Suite date, the reality of the situation was, "For me, personally, I wouldn't be able to say yes to an engagement and [continue] to move forward if you have slept with the other women."

Whether you want to call it an ultimatum or a dealbreaker, Peter said that Madi was simply outlining the expectations of the type of relationship she wants to have. "Trust me, it made it an insanely incredibly difficult week for me. There's no doubt about that," Peter told ET. "But I can't fault her for sharing her heart."

Peter's defense of Madison comes after fans on Twitter started comparing her to recent Bachelorette villain, Luke P. Luke, who appeared on Hannah Brown's season of the show, had a similar expectation that Hannah wouldn't be intimate with other potential suitors in the Fantasy Suites. He was, admittedly, much more aggressive about his demands that Hannah not have sex with other men, but that didn't stop people from wondering if Madison was the new Luke P. Though, as Peter said in his defense of Madi, she was being honest about how she felt about the situation. In contrast, Luke P. shamed Hannah after the fact, something Madison was very careful not to do.

Luke P. comparisons aside, Peter standing up for Madi may be a clue of what happens later in the season. Based on the preview for the next episode, it appears that Madi does not attend the next rose ceremony. As Peter frets over where she is, the other women get upset that Peter seems to be prioritizing Madi over them. Perhaps his defense of Madison is evidence that he ends up convincing her to return to the show. Or he could be trying to win her back right now, since there's plenty of evidence that his season wasn't finished when production wrapped.