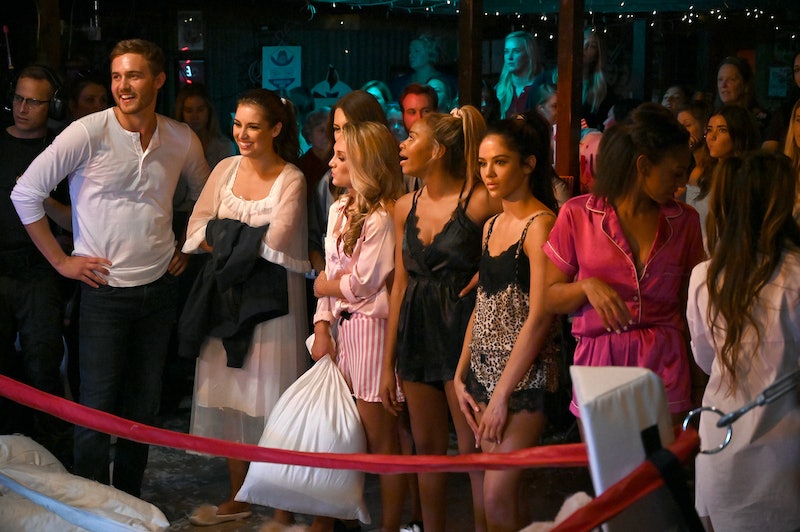 Fighting among contestants isn't anything new for The Bachelor, but when it comes to Peter's season, it's felt like a non-stop assault. And yet, Peter thinks the drama between the women on The Bachelor is actually a good thing that demonstrates how much the process can work. Yes, from champagne-gate and Alayah's brief return to Kelsey and Tammy's recent showdown, all of it, according to the Bachelor, is how he's going to find love.

"Obviously, you don't like to see that as you're going through the whole experience, but I kept looking back on it. That drama kind of showed that this is working," Peter explained during a recent appearance on Good Morning America. "If all the women were getting along super well, they probably wouldn't have been super into me. If it was too easy, that wouldn't have been a good thing."

That's certainly one way to look at why the drama on Peter's season appears to be never-ending. Or, you know, it could have something to do with the fact that Peter keeps sending all of the contestants mixed signals on any given week. He sent Alayah home because she was causing too much drama only to invite her back to stay the very next week. Then, when the other women got mad about it, instead of sticking to his decision, he opted to send Alayah home yet again, just because it was too much to handle.

With so much back-and-forth behavior, how are any of the women expected to trust him and the relationship they share with him? It's their insecurities about where they stand that seems to be inspiring all these tensions in the house. Not to mention that he keeps ducking out of cocktail parties and making out with girls in front of the entire group.

For his part, Peter admits that he did make several missteps throughout the entire process and wishes he could go back to correct some of his choices. "I know I made so many mistakes, and I'm sorry guys, it's just very, very difficult," he added. "If there's anything, maybe I wish I put my foot down a little bit more during certain situations."

We're already halfway through the season, and as the number of women continue to dwindle, hopefully so will the fighting. Because while Peter may like seeing women fight over him or think it's the foundation for a healthy relationship, it's starting to get a little old for the rest of us.