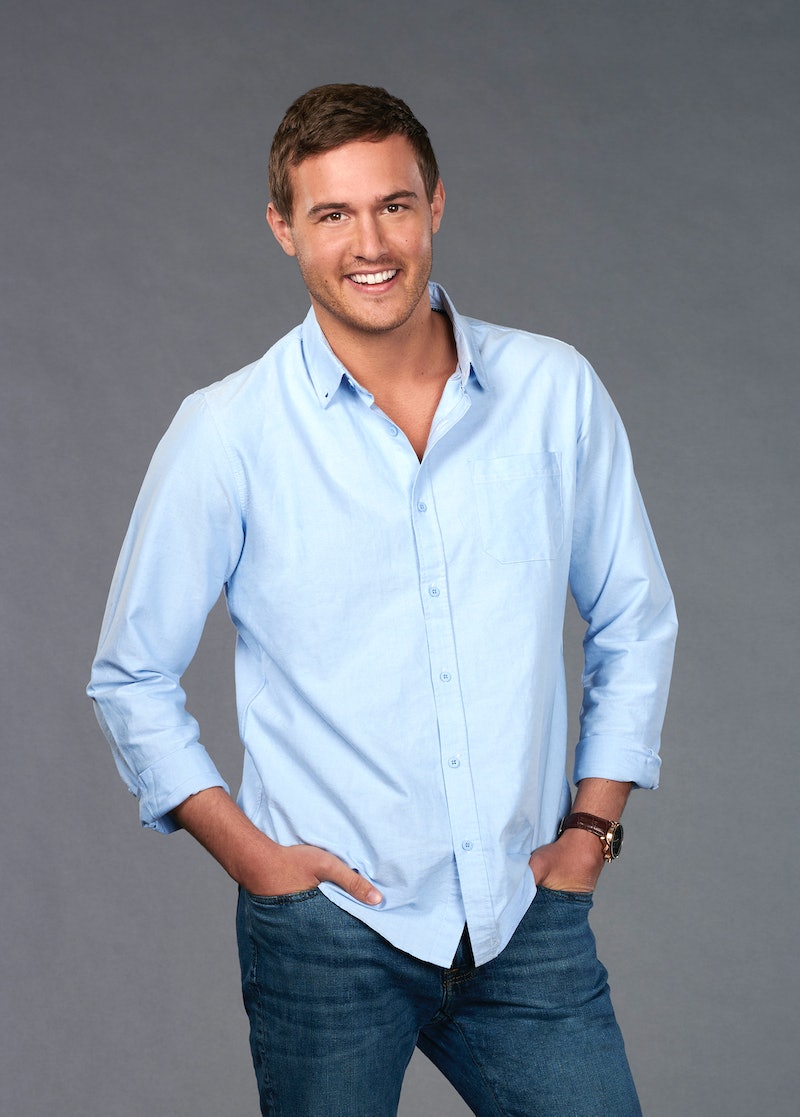 Bachelorette suitors only get one chance to make a first impression, and that first impression needs to differentiate them from over two dozen other men all vying for the heart of the same woman. It's a high bar, but Peter from Hannah B.'s Bachelorette season may be able to fly his way right over it. The 27-year-old pilot seems to be exactly what Hannah is looking for in a partner.

Peter's ABC bio describes him as an apple that doesn't fall far from the tree: he comes from a family of flyers. His parents met when his dad was a pilot and his mom was a flight attendant, and Peter has followed suit. He hasn't quite followed his career out of the house yet, though — he's still living at home in Westlake, California. As for what he does when he's not flying all over the world, Peter "enjoys snowboarding, watching football, and line dancing" — so he has an eclectic mix of hobbies. His ABC bio continues that his life motto is, "you should live this life always expecting something great is about to happen to you," and that he once took a date on a sunset flight to Santa Barbara for dinner. Sounds like someone who knows how to sweep a woman off of her feet.

One thing that that isn't mentioned in Peter's ABC profile, however, is his religious upbringing — which could help him to bond with Hannah. According to high school sports site MaxPreps, a young Peter Weber played Football for the Oaks Christian High School varsity football team in Westlake Village, California. The photo is a little old, but it definitely looks like Peter, and the graduation year matches up with how old he is now. So if that's the right Peter Weber and he's still practicing the Christian values instilled in him in high school, he and Hannah will be able to connect over their shared faith.

Demi, Hannah's former co-contestant on The Bachelor, told Entertainment Tonight that Hannah is looking for someone "who's religious and somebody who is a man and isn't scared of anything." With religion being so important to Hannah, coming from that background could be what pushes Peter from being just another face on night one to making his way to hometowns, fantasy suites, and possibly a proposal.

However, Garrett's bio also mentions that he enjoys going to church, and Luke P. apparently had "a religious awakening in college," which has led to the decision that "when he dates, it's for marriage." So Peter isn't the only contestant with the religious values Hannah is looking for, but it is one one of many things that could make him a frontrunner. Remember, Demi also said Hannah is looking for someone who "isn't scared of anything," and between the flying, snowboarding, and carpe diem life motto, Peter just might fit the bill.

See if the hopeful pilot catches Hannah B.'s eye when The Bachelorette premieres Monday, May 13 on ABC.