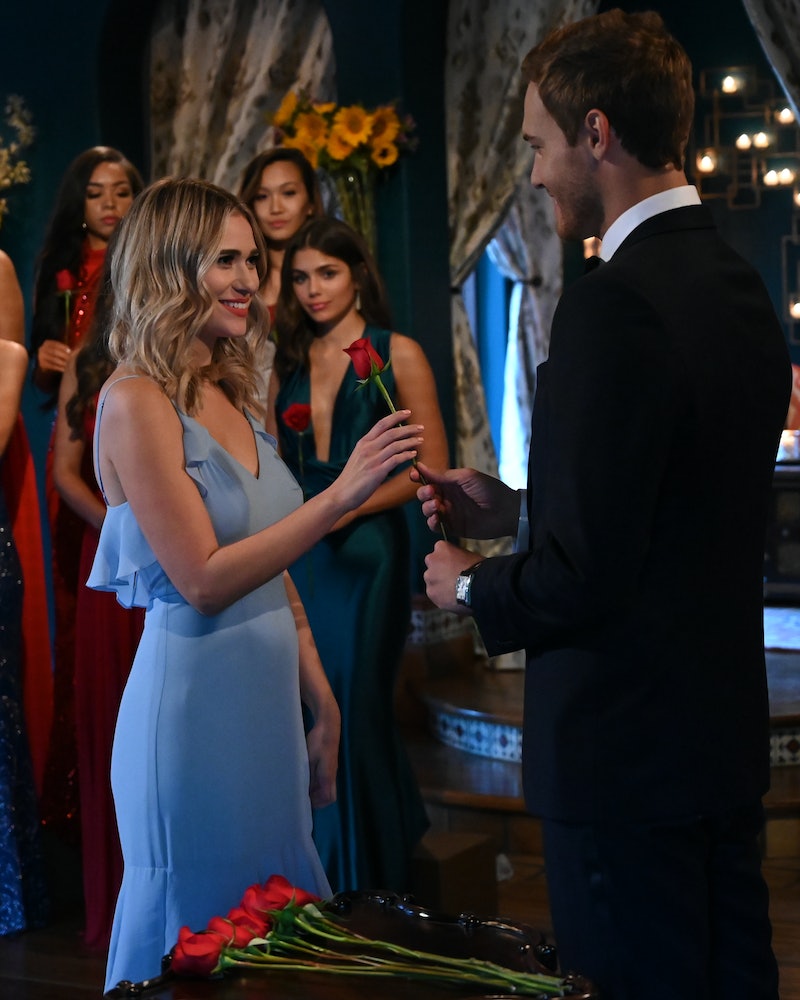 The two-on-one date on The Bachelor didn't end the way anyone was expecting — especially not Mykenna. Despite telling her that he "trusts" her and sending Tammy home early on the Feb. 5 episode, Peter did Mykenna dirty with a delayed her Bachelor elimination later that evening. After a screaming match following the telenovela group date in Santiago, Chile — in which Tammy accused Mykenna of being immature and only appearing on the show to build her brand — Peter asked the two ladies to meet him ahead of the Rose Ceremony to talk things out.

The fashion blogger was convinced that Peter saw some kind of future with her after he decided to send Tammy home on their "date," only to be blindsided by his decision not to give her a rose later that evening. "I don't get what just happened," a very confused Mykenna told cameras after being eliminated alongside Sydney, who at one point, seemed to be one of the show's frontrunners. "Why did he keep me there? Why didn't he just send us both home?"

Though Peter ultimately told Mykenna that she would "make someone very happy someday," that didn't soften the blow of his sudden change of heart about keeping her around. And she wasn't the only one shocked by his actions, as Bachelor Nation decided that Peter's actions were definitely "cold."

While Mykenna may have been one of the more divisive contestants on this season of The Bachelor, thanks to her emotional reactions to the other girls and her pre-Rose Ceremony monologues about her relationship with Peter, his handling of the "two-on-one" made him come off worse than her. After all, for the past few weeks, Peter has been called out for "rewarding" the girls' drama and even stirring the pot himself by inviting Alayah back onto the show after her elimination. By sending Tammy home only to turn around and eliminate Mykenna, it seemed like yet another instance in which Peter's indecisiveness and inclination towards drama took over.

Neither Tammy nor Mykenna had a particularly strong connection with Peter during their time on the show, so it wasn't surprising that they wouldn't make it much further. But he could have simply sent them both home before the Rose Ceremony to finally make good on his promise that he was ready to "move forward" without drama. Sure, it wouldn't have been satisfying for either Mykenna or Tammy, but it would probably send the message to the other women that Peter really is over all of the fighting.

Alternatively, he could have done away with the pre-Rose Ceremony meeting entirely, and simply sent them both home later that evening. While there might have been some remaining drama at the cocktail party as a result, it wouldn't have given Mykenna the same level of emotional whiplash as the eventual elimination did.

It's expected that the women are going to butt heads, but the way Peter handled the Mykenna situation might mean that the ultimate conflict will be between him and Bachelor Nation.