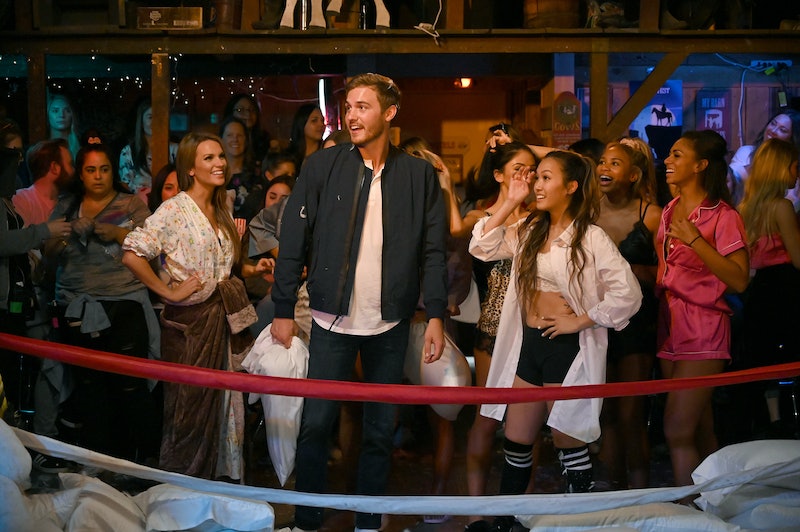 Falling in love can be painful at times, but in the case of Peter Weber, that concept is about to be taken quite literally. This week The Bachelor will be airing two episodes — one during its normal Monday night time slot, followed by another on Wednesday, Feb. 3 — and include footage from Peter's head injury on The Bachelor, which was teased during the latest promo. Back in October 2019, multiple outlets reported that Peter had split his head open while filming his season on a golf course in Costa Rica, which resulted in a trip to the hospital. (Hence the ambulance that you see in the promo.)

Chris Harrison confirmed the reports about the accident shortly thereafter, telling Entertainment Tonight that while Peter had been hurt, he was completely fine and just as handsome as ever. "He did get stitches, but he's 100% OK and production is already back underway," Harrison said in a statement. "He's still the dashing, handsome pilot we've all dreamed of."

Now it seems the time has come to finally learn firsthand exactly what happened to cause this incident to take place. However, it might end up being a blessing in disguise and bring Peter one step closer to finding his future wife.

Not long after reports of the accident came to light, Peter commented on the ordeal himself with Entertainment Tonight. "There was a ton of blood. It looked like a murder scene when it happened," he explained. "My forehead was literally split open." Though despite the gruesome appearance, he claimed that the injury didn't slow down production at all. In fact, Peter seemed to hint that the incident had an unforeseen ripple effect among his contestants that went on to impact the rest of the season.

"It kind of does play a role in a little bit later on in the season. I'm not gonna spoil it, but it's actually kind of cool," he teased to the outlet. "The girls took care of me. They definitely kind of felt bad about it, but I wasn't gonna let this slow down my journey to find what I really wanted and it's all good. I got a battle scar now."

That sounds... ominous. Perhaps in helping Peter on his road to recovery, he ends up seeing a side of one of his contestants that he never noticed before, which ends up bringing them closer together. (It may be worth mentioning that Victoria P. is a nurse, so make of that what you will.) Regardless, Peter could use a little bit of sympathy right about now, given how upset most of the women are with him on the show. So, as ironic as it may seem, maybe this head injury is the best thing that could've happened to him and help him to find the love he's searching for.