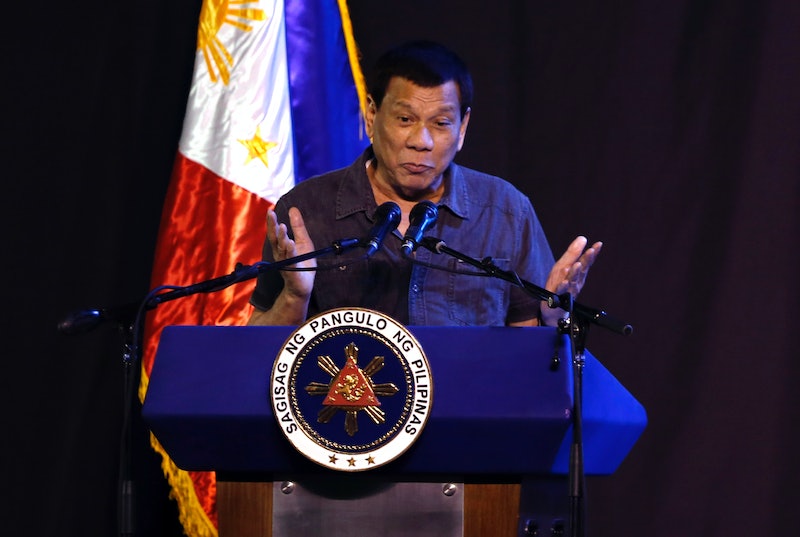 The president of the Philippines, who has long made light of violence against women, is under fire once again for joking about rape. Last Thursday, President Rodrigo Duterte implied that rape is unavoidable as long as there are beautiful women. Women's group in the country responded forcefully, calling on Filipinos to "rise up" against the president.

Duterte was speaking about his claims that Davao, the city where he was formerly the mayor, is free from crime. Many have criticized the president for this, and he used the speech to go after his detractors.

Philippine National Police have reported that the city of Davao had the highest number of rapes in the country during the second quarter. Some 42 people reported being raped there in just April and June, The New York Times reported.

Ignoring rape statistics in his figures for crime in the city is not his only questionable act. The president is accused of orchestrating extrajudicial killings in the city, a campaign he has promised to bring to the rest of the country in a drug war.

But it's his disregard for violence against women, and at times endorsement of just that, that has women's groups in the Philippines speaking out.

Many of the groups came together to release a statement under the moniker, #BabaeAko (I Am Woman). "Rape has nothing to do with physical appearance or love," the statement reads. "Rape is all about the exercise of power against women. Rape is a heinous crime based on entitlement and on the false assumption that women are chattel, to be owned, to be punished according to the whims of men."

They point out the many times the president has made offensive statements about rape and women's bodies. When running for president in 2016, he said that he should have been first in line to rape an Australian missionary who was gang raped in his city's jail, because he was mayor at the time, according to CNN.

Then when his own daughter Sara, now the mayor of Davao, said that she had experienced sexual assault, Duterte called her a "drama queen." He also said, "She can’t be raped — she carries a gun."

Duterte then said he would pardon soldiers who commit rape and offered "42 virgins" to wealthy businessmen to come to the country.

The group also noted that the president sees women's sexuality as their only reason for existence. He has told soldiers to shoot rebel women fighters in the vagina to make them "useless."

In the same statement, #BabaeAko then tied in their complaints with general condemnations of the president, saying "enough":

Duterte's rapist mentality also influenced all his other policies. He sees the presidency as a license to impose ownership over all Filipinos, a license to dispose of the national patrimony as he sees fit, a license to decide who lives or dies. #BabaeAko says enough. We call on all Filipinos to rise up against a president who spits on everything our anscestors fought and died for.

Duterte's term runs through 2022, but police have already promised that the bloodshed the president has ushered in for his drug war will be thwarted with body cameras and other measures. No such solution is immediately available for the president's statements on rape.