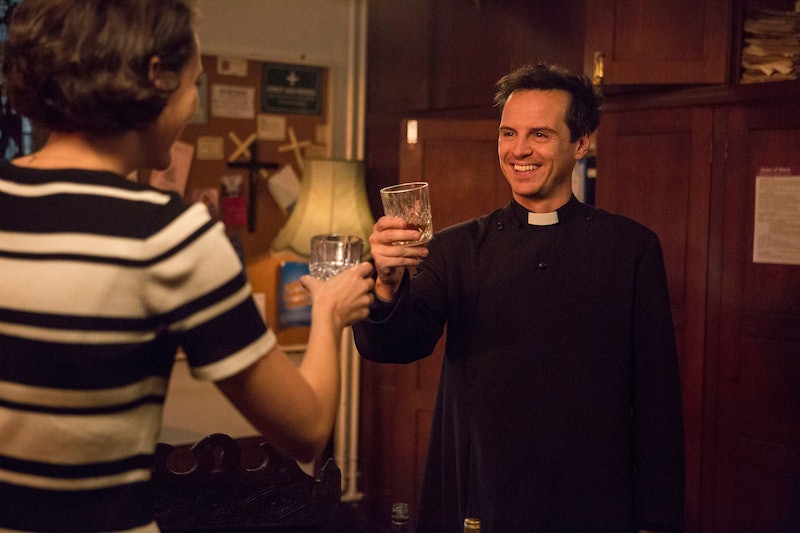 He's an Olivier nominee and has starred in 1917 and Sherlock, but, to us, Andrew Scott will be remembered for one line and one line only: "Kneel." Of course, I'm talking about the character in Phoebe Waller-Bridge's now legendary series, Fleabag. With scenes that saw our anti-heroine Fleabag do some incredibly unholy things, it begged the question where Waller-Bridge found inspiration for the clergyman battling with his own desires. Turns out, Waller-Bridge received advice from an actual priest.

In today's episode of BBC radio's Woman's Hour, Waller-Bridge joined presenter Jenni Murray to discuss her recents successes, including her involvement with the upcoming Bond film No Time To Die, as well as Killing Eve and releasing a new book, Fleabag: The Scriptures. Naturally, however, the conversation soon turned to the hot priest.

"I resisted the idea for a while, especially because there's been so many priests in comedy. It's almost a crowded market of iconic priests ... I didn't want to fall into the traps of making him a comedy priest. And then I thought, but what if Andrew Scott played him?"

Phoebe also shared that she sought the advice of an IRL priest, Father William, who was refreshingly forthcoming when discussing the topic of celibacy.

"Well, he was very kind with his approach... he had a lot of humour about it," she laughed. "I tried to talk to other priests about it but obviously it's a sensitive subject. I tried to come into it sensitively. But I wanted to ask all the questions I believed Fleabag would ask the priest."

While some would dread to think what Fleabag would ask a priest (insert hiding behind hands emoji), Waller-Bridge assured Jenni Murray that Father William wasn't shocked by her frank talk.

"[He] just had this roaring laugh and open heart and believed that if someone has a question you must answer it honestly," she laughed. "He said that it was a great gift for him but something he struggled with everyday. It was part of his faith."

The taboo 'will-they, won't they?' relationship between the hot priest and the thirty-something certainly kept us gripped for the second and (sadly) final season of the Fleabag series. But, like many, I haven't been able to start thinking about *that* tear-jerking final scene ever since it aired.

"There is that moment at the end where he says he loves her after she declares her love for him, why was it important for him to do that?" asked Murray.

"Well that was Andrew," Phoebe revealed.

"I was debating whether he should say it back for a while. Then when we got on set... Andrew said he has to say it back, because 'it'll past' being the last thing he said... could be harsh."