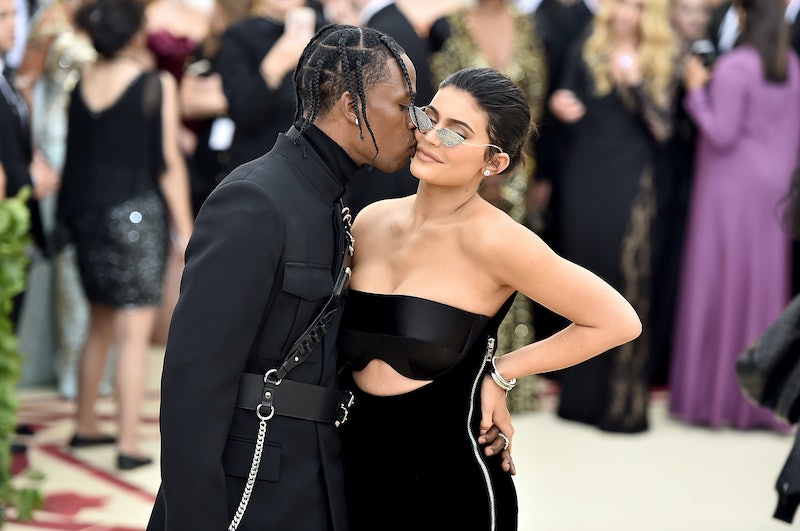 Actually, the party had a dual theme: gas station and Cactus Jack, which is the rapper's collection with Nike. This means that there were Nike swoosh logos all over the party. There were even sneakers hanging as decoration at the venue. Just imagine having so much disposable income that many Nike sneakers can be used solely for decorative purposes. Jenner really did go all out.

In one of her Instagram Story videos, she revealed to Kris Jenner's boyfriend Corey Gamble, "I creative directed this whole party, by the way." The phrase "Cactus Jack" was all over the party. And this Jenner-created gas station even had its own convenient store, full of Cactus Jack labeled products and even some Travis Scott-branded paper towels.

There was even a soft drink machine that dispensed Cactus Cooler drinks, complete with levers adorned with some Nike logos.

Aside from the Cactus Cooler drinks, there was a machine at the makeshift gas station that served up Hennessy Slurpees. And while not pictured in Jenner's videos, there were also "cannabis-infused treats" from Kiva Confections, since, according to the company, the venue didn't permit smoking.

There was also food from the fictional Cactus Burger, because a party is only as good as its snacks.

There was a merchandise stand at the event, with shirts for the guests to take home as souvenirs. And of course, as mentioned, there were Nike sneakers hanging from trees and mounted to the walls.

The party even included activities, sort of. There was a tattoo artist on hand inking up the guests. Jenner shared videos on her Instagram Story of her and Scott getting tatted up at the event.

She even got a kiss from her man while she waited for the tattoo artist to finish up his work.

And would a gas station even be a gas station if there weren't some cars on the scene? There was a car decorated with the rapper's name all over it, presumably a birthday gift from the Kylie Cosmetics founder.

Even though almost nothing at this party could be considered "typical" of a birthday party, there was a cake. However, it was not a standard sheet cake from a bakery. The birthday cake was shaped and decorated like a Cactus Jack Nike sneaker. Of course.

Aside from the party itself, the guest list was pretty top-notch. As expected, most of the Kardashian/Jenner family members were on hand for the "Sick Mode" rapper's big celebration. Kim Kardashian West, Kanye West, Khloé Kardashian, Kourtney Kardashian, and Kendall Jenner enjoyed the gas station turn-up.

Jenner really did outdo herself with this birthday celebration. How can anyone have a birthday and not compare it to this? Not only that, but gas stations will never be the same.