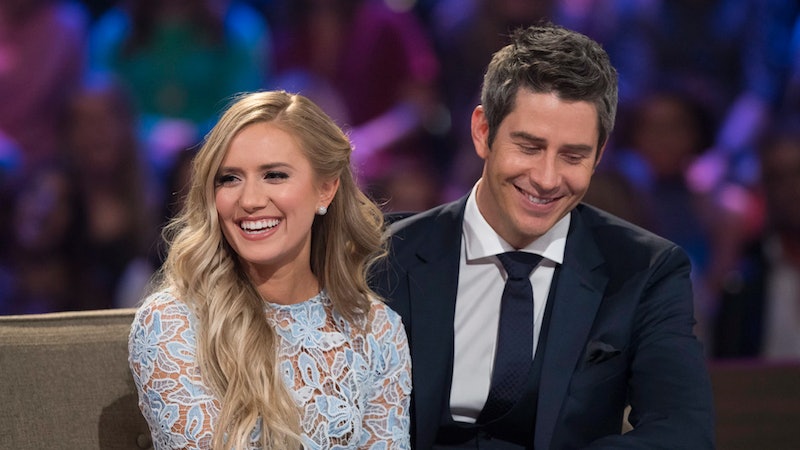 After the emotional rollercoaster Bachelor fans experienced watching Arie Luyendyk Jr. change his mind after the finale and end up with runner up Lauren Burnham instead of Becca Kufrin, this couple is still living happily ever after — and now, they're a family of three. They've officially welcomed their daughter into the world, and on Thursday, Arie and Lauren shared the first photos of baby Alessi with their followers, too.

If you follow Lauren and Arie on Instagram, you probably noticed that on Wednesday, they were all about the hospital updates after she went into labor. Then, on Wednesday afternoon, their baby finally made her grand entrance, and now, their feeds are all about her. Lauren shared the first photo of her daughter, along with revealing that her name is Alessi Ren, writing that so far, she is sweet and calm — and weighs 6 pounds, 13 ounces, for the record. Arie posted a photo of himself holding her on his own Instagram, too.

And now, Arie's updating his Instagram Story with some more seriously cute photos of his little girl with some very sweet captions, making it clear that he couldn't be more proud to become a dad.

Spoiler alert: This little one is super adorable. In one post, Arie shared a photo of Lauren cuddling up to Alessi in bed, writing, "I'm so proud of you @laureneburnham... You're truly incredible and you did so good today."

Then, later in the day on Thursday, he shared another photo of Alessi in her bassinet, swaddled in a blanket and decked out in a pink crocheted hat. As Arie wrote in the post, Lauren was asleep, but he just couldn't stop looking at his daughter. And can anyone blame him? She's pretty cute.

Earlier on Wednesday, Arie and Lauren shared a photo from the hospital once she had the chance to get dressed in her gown. They posed together in the hallway, both of them cradling Lauren's bump.

Lauren also shared her final bump update on her Baby Luyendyk Instagram account, where she was standing by herself, letting followers take a last peek at her bump from the side as she's done every week of her pregnancy. This time, she was 39 weeks pregnant and about to meet Alessi for the first time.

Being that so much of Alessi's journey has been documented on social media so far, it only seemed appropriate when Arie announced her arrival on his Instagram Story, too, although the couple waited a few hours before they shared her name and these first photos.

"We have a healthy, BEAUTIFUL baby girl," Arie wrote at the time. "6 lbs, 13 oz, 20 inches long. Mommy and baby are doing great, we are so incredibly happy."

Now that Lauren and Arie's baby has finally arrived, it's probably safe to assume that these Instagram Stories will give fans so much quality content involving their dive into parenthood. So far, they both seem so excited to have met their daughter, and this is only the beginning.