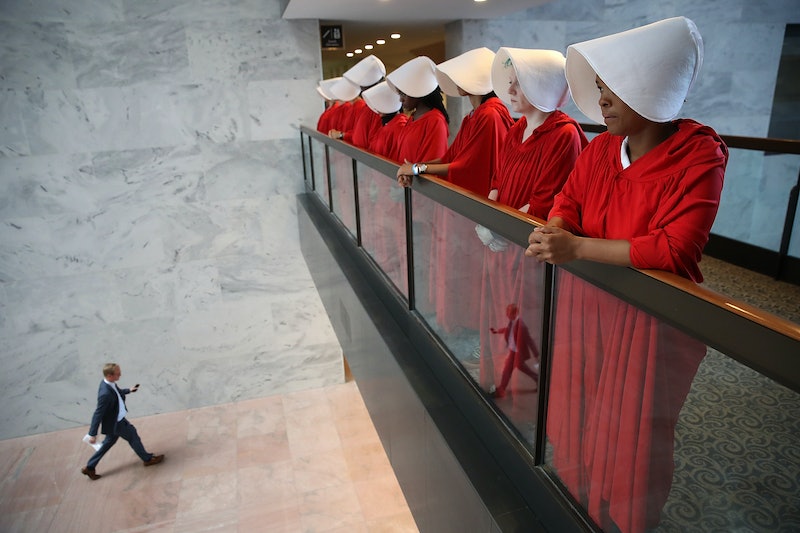 Protests marked the beginning of the hearings for Judge Brett Kavanaugh in and out of the courtroom. A group of women dressed as handmaids reminiscent of The Handmaid's Tale awaited the judiciary committee for Kavanaugh's confirmation hearing, lining the halls in the red robes with the winged white hats reminiscent of the Hulu series and Margaret Atwood's book.

The pictures were captured by journalists covering the Supreme Court nominee's hearings and previewed the combative manner with which the hearings would begin. Just after the start of the hearing, Democrats interrupted the committee chairman Sen. Charles Grassley (R-Iowa) to bring attention to the fact that many requested documents had not been released publicly and that 42,000 pages of documents were released at the last minute on Monday night.

Senators including Cory Booker (D-New Jersey), Kamala Harris (D-California), Mazie Hirono (D-Hawaii), and Richard Blumenthal (D-Connecticut) called for more time to review the documents and that the hearing be adjourned and then postponed until they were able to do so. "We cannot possibly move forward, Mr. Chairman, with this hearing,” Harris said in her remarks.

"It will be tainted and stained forever," Blumenthal told Grassley if the confirmation was not postponed.

Their protests were echoed in the chamber by protestors who shouted out repeatedly. Senators called repeatedly for a vote that the hearing be adjourned and postponed. Grassley allowed the senators to speak at length but did not allow for a vote on adjourning — or moving to executive session — calling them out of order.

The messages inside and outside the hearing room differed. Inside the message focused on the documents with several Democratic senators asking, "What are we trying to hide?"

“Ninety-three percent of the records from Kavanaugh’s tenure in the [George W. Bush] White House as counsel and staff secretary have not been provided to the Senate and 96 percent are hidden to the public,” the ranking member of the committee, Sen. Dianne Feinstein of California, told the committee. "This entire process has cast a cloud over Judge Kavanaugh."

Outside the hearing the message of the handmaids focused on women's rights and the fear that Kavanaugh's confirmation could lead to the overturning of Roe v. Wade. The book and series the women evoked center on a dystopian society where a radical religious sect overthrows the U.S. government and reorganize society by radically redefining the role of women and using their bodies as men in charge see fit.

The protestors belong to a group called Demand Justice but declined comment to reporters. The group's statement on Kavanaugh provided to The Hill detailed the ways that his confirmation could endanger women's healthcare by limiting abortion rights and ending the requirement that health insurance cover pre-existing conditions — particularly for immigrants and minorities.

"Right now in American, far too many women of color cannot access safe, affordable healthcare and the ability to decide whether, when and how to raise thriving families is out of reach," the group's statement said. "Brett Kavanaugh will take this already harsh reality and make it worse."

The New York Times reported that the women, numbering about a dozen, appeared to be praying. Inside the hearing women's protests were much louder. Reserved primarily for when Republicans, including Grassley, spoke, women in the audience would scream, many times invoking reproductive rights when shouting, "Vote no! Vote no!"

Between the call for more documents and the attention given to his views on abortion rights, the message from Democratic senators and protestors was clear — and these photos show it.