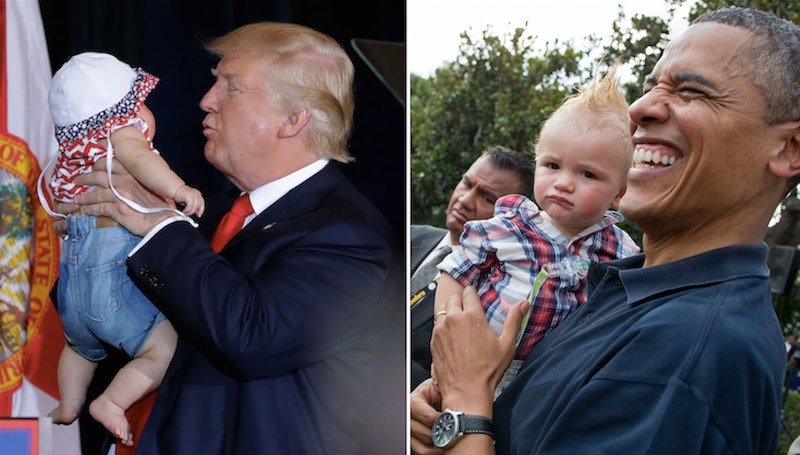 President Donald Trump and former President Barack Obama are clearly two very different presidents with markedly different policy agendas. But how do the two men compare with it comes to interacting with America's future? While one is known for implementing a policy that saw babies ripped from their families at the border, the other has been called "the baby whisperer." In fact, photos of children with Obama vs. with Trump show each president has their own unique style of interacting with these future voters.

While nobody quite knows why or how politicians kissing babies became a time-honored tradition in American politics, politicians across the aisle have been planting kisses on the foreheads and cheeks of strangers' children for decades. According to History.com, the tradition can be traced back to at least 1833 when then-President Andrew Jackson was handed a baby while greeting a crowd in New Jersey. Although Jackson didn't kiss that baby — he reportedly ordered his secretary of war to do it for him — the move became a popular part of a campaigning politician's repertoire. But not every president has been so gungf-ho about the practice. Both Grover Cleveland and Richard Nixon reportedly refused to kiss babies, according to History.com.

Neither Trump nor Obama, however, have shied away from interacting with children. Peep these photos of kids with Obama and with Trump to see how the two compare: