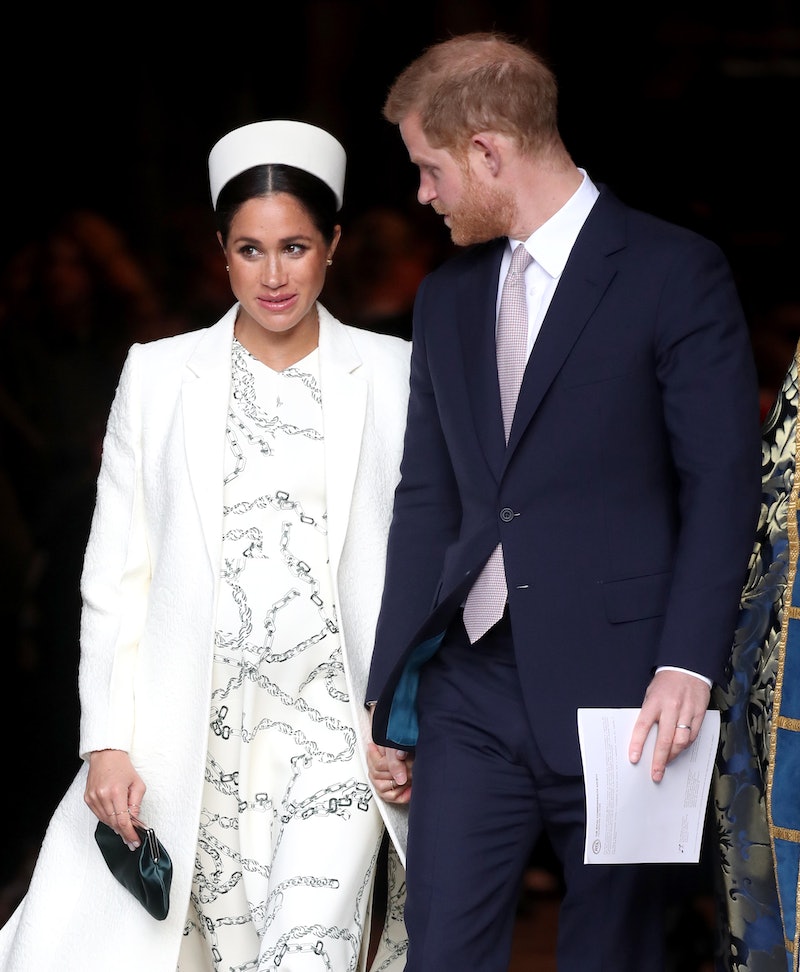 The royal baby has arrived — but you won't get to see him right away. Meghan Markle and Prince Harry, the Duchess and Duke of Sussex, welcomed their first child, a son, early Monday morning, May 6, according to an official statement from Buckingham Palace. The baby boy's name has not yet been announced, and if the royals have it their way, we won't be seeing photos of the newest addition on Monday either. While photos of Meghan Markle and Prince Harry's first child aren't out yet, they should be coming in just a couple days.

Prince Harry made an appearance outside of the couple's residence in Windsor to personally announce the news to reporters, and he was absolutely gushing. "Mother and baby are doing incredibly well," he said. "It’s been the most amazing experience I can ever possibly imagine. How any woman does what they do is beyond comprehension, and we’re both absolutely thrilled.”

His Royal Highness said that they were still thinking about the baby's name, adding that the birth was "a little overdue" and that they've had some time to think about names. He also confirmed that the couple planned to make another announcement in around two days "so everyone can see the baby."

"As every father and parent will ever say, you know, your baby is absolutely amazing, but this little thing is absolutely to die for, so I'm just over the moon," he added.

Continuing their own tradition of bucking modern royal conventions and blazing their own path, the Duke and Duchess of Sussex have chosen to take a different approach when it comes to announcing their birth to the world. Prince William and Kate Middleton, the Duke and Duchess of Cambridge, revealed their three children — Prince George, Princess Charlotte, and Prince Louis — to the public on the steps of the Lindo Wing hours after their respective births. William and Harry's mother, the late Princess Diana, debuted her sons in the same manner.

In contrast, the Duke and Duchess of Sussex have chosen to keep all details of the birth private, only announcing when she was in labor and when she gave birth to the public. When the couple is ready, they will invite a small group of reporters and photographers to capture the first images of their son and make their public debut as a new family.

As expected, all members of the royal family were informed of the news prior to the public and are thrilled about the arrival of a new addition. "The Queen, The Duke of Edinburgh, The Prince of Wales, The Duchess of Cornwall, The Duke and Duchess of Cambridge, Lady Jane Fellowes, Lady Sarah McCorquodale and Earl Spencer have been informed and are delighted with the news," Buckingham Palace said in a statement. "The Duchess’s mother, Doria Ragland, who is overjoyed by the arrival of her first grandchild, is with Their Royal Highnesses at Frogmore Cottage. Her Royal Highness and the baby are both doing well."

Another message was posted on the couple's shared Instagram account, thanking the public for their support and confirming that more news will be announced soon. "The Duchess and baby are both healthy and well, and the couple thank members of the public for their shared excitement and support during this very special time in their lives," the couple said. "More details will be shared in the forthcoming days." The world is ready, and fans are already refreshing their Twitter timelines while waiting for the new royal baby to make his debut.