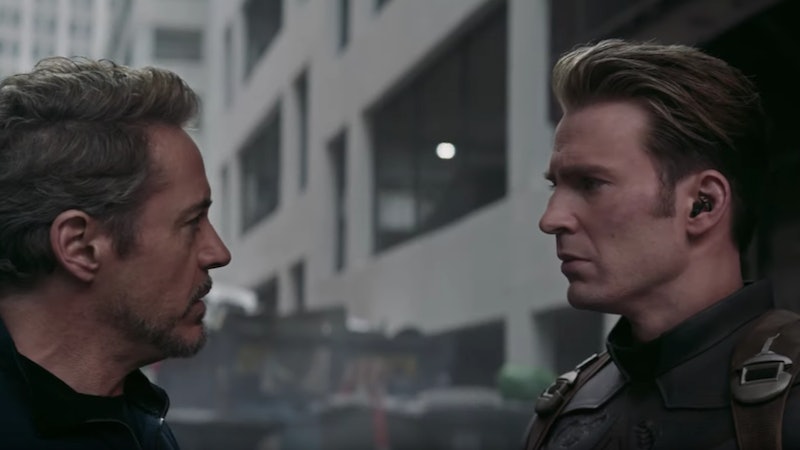 It's hard to believe that the Marvel Cinematic Universe started 11 years ago. In those 11 years, Marvel Studios has released over 20 movies, which makes now the perfect time to look back at photos of the Avengers actors in their first movie versus now to see how much they've changed over the years.

As the pinnacle of the 22-film series that began with 2008’s Iron Man, Endgame could prove to be one of the most, if not the most, important installment to come from the beloved franchise's past decade of releases. Despite having 10 more films planned for release in the near future, all of which are said to be in various stages of production, Marvel has hailed Endgame as the end of an era.

While it goes without saying that the group of superheroes has come a long way since they first assembled in 2012's The Avengers, it can sometimes be hard to remember what each actor looked like during their early superhero days. And although there are many who have remained unchanged throughout the years, some of these photos feel like a major blast from the past.

In 2008, Iron Man became the launching pad for Marvel's Cinematic Universe and the entire Avengers narrative. Although the character, played by Robert Downey Jr., has remained relatively the same in terms of looks, the arms dealer turned superhero quickly changed his ways after realizing that he had so many resources to offer the world as a good guy.

Nicky Fury has looked pretty much the same since fans were introduced to him in the 2008 post-credits scene of Iron Man. The character, played by Samuel L. Jackson, entered to introduce the idea of a superhero team. At the film's ending, he tells Tony Stark that Iron Man is not "the only superhero in the world."

A lot has changed for War Machine over the years. The character, initially played by Terrance Howard, was first introduced in the first Iron Man. After Howard, left the role, the part was later taken over by Don Cheadle in Iron Man 2.

As one of the original Avengers, Black Widow has had quite a few hair transformations throughout the years. In her first appearance in Iron Man 2 (2010), Black Widow sported red hair, and her hair color changed drastically over the years, going from deep red to blonde, to blonde and red in Endgame. Despite minor changes in appearance, Black Widow's ability to kick-ass and take names has remained the same.

As a founding member of the Avengers, Thor's look has gone through a few changes over the years. When fans first met the God of Thunder in 2011's Thor, he was rocking a long blonde mane. In the time since, he's cut his locks and is now sporting a much shorter style.

Fans have watched Loki, played by Tom Hiddleston, evolve quite a bit since his first appearance in the first Thor film (2011). While his look hasn't changed much, his hair has grown a little longer over the years, and his allegiances have changed multiple times over.

In the trailer for Avengers: Endgame, Hawkeye, played by Jeremy Renner, has completely different look from when fans were first introduced to him via uncredited role in 2011's Thor, and later got to know him in 2012's The Avengers. In fact, he's not even the same man anymore, going by the name Ronin in Endgame.

In his 2011 MCU debut Captain America: The First Avenger, it was easy to see that Steve Rogers, played by Chris Evans, had a big heart. When he learned that his body was not in any condition to serve in the war, Rogers was turned into a super-soldier in WWII through a secret experiment. In later Avengers films, Captain America began sporting a scruffy beard that gave him an entirely new look. And now almost 10 years later, Captain America remains one of the strongest superheroes in the universe.

The hair on Winter Soldier has grown noticeably longer since his inaugural appearance in 2011's Captain America: The First Avenger.

Bruce Banner has certainly gone through some drastic changes since his MCU debut in 2008's The Incredible Hulk. The part, initially played by Ed Norton in the solo film, was taken over by Mark Ruffalo in 2012 for The Avengers, who has remained in the role ever since.

Since his first appearance in 2014's Captain America: The Winter Soldier, Falcon has kept the same look.

Introduced during the end credits of Captain America: The Winter Soldier (2014), Scarlet Witch made a splash in Avengers: Age of Ultron in 2015, and has evolved from an angsty teen to a full on superhero.

Peter Quill, or Star-Lord as he'd like to be called, made his MCU debut in 2014's Guardians of the Galaxy. He's grown up a lot in the past few years, establishing himself as the leader of his own superhero team in space before joining forces with the Avengers to fight Thanos.

Nebula, as played by Zoe Saldana, was also introduced in 2014's Guardians of the Galaxy. She started out a bit more dangerous and mischievous, and, well, evil, but since joining forces with Peter, she's softened quite a bit.

Nebula, Gamora's cyborg sister, as played by Karen Gillan, made her first appearance in Guardians as well. Like Loki before her, Nebula has changed both physically and emotionally since her 2014 debut, even switching over to the good side.

Groot is the only member of the MCU who has actually gotten younger since joining the MCU in 2014's Guardians. Now, in Endgame, he's technically the teenage child of the adult Groot fans met five years ago. (Other Guardians not pictured: Rocket and Drax, who, really, look exactly the same as they did in 2014.)

J.A.R.V.I.S. has gone through a dramatic makeover since first appearing as a tool of artificial intelligence for Iron Man in 2008. With the help of Tony Starks and Thor, fans watched the character's rebirth as he morphed from a voice-only role into physical being in Avengers: Age of Ultron.

Ant-Man, played by Paul Rudd, was first introduced in the character's self-titled 2015 film. Not many years have passed since his theatrical debut, but with Rudd's youthful good looks it's likely that very will little will change going forward.

Black Panther aka T'Challa first made acquaintance with Marvel fans in 2016's Captain America: Civil War and later became one of the franchise's most popular characters with his solo film debut in 2018. Other than letting his beard grow in a little longer, BP's look has remained relatively unchanged.

Peter Parker made his debut in Captain America: Civil War, entering as an assistant to Ironman. Although his looks have matured slightly, Spiderman and his aesthetics have remained the same since 2016.

Since debuting in his own self-titled movie in 2016, Dr. Strange has gained a bit of facial hair. However, his overall look has not changed much at all.

After watching Brie Larson play the role of Captain Marvel with a natural face just last month, some fans were upset to see Carol Danvers step into the Avengers headquarters with a more made-up look in the Endgame trailer.

As the highest-grossing film franchise of all time, Marvel's Cinematic Universe movie's have grossed over $18.5 billion and counting at the global box office. And although it seems that some of the characters will be dying off, thanks to the devastating endings of Infinity War and Endgame, these superheroes will continue to remain some of the most-widely recognized characters in the world for years to come.