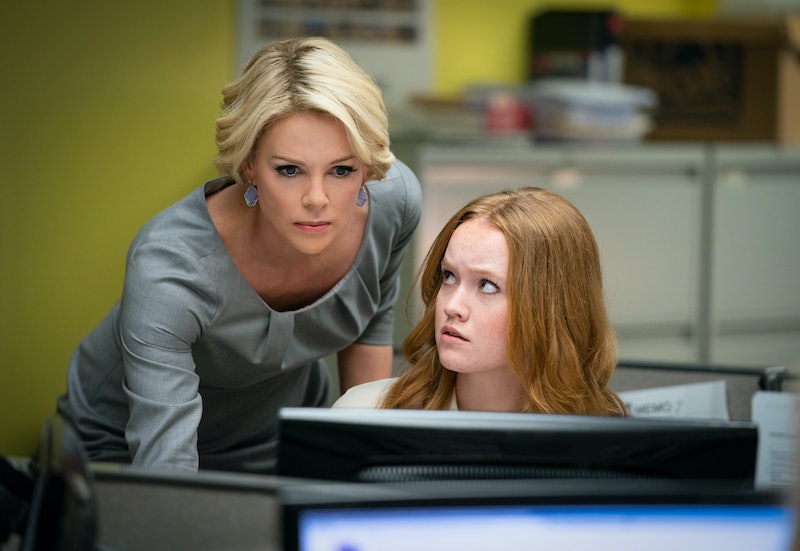 When the first trailer for Bombshell was released everyone's reaction was the same: How is that Charlize Theron? The actor looks so much like her character, news anchor Megyn Kelly, that it hard to parse out her face beneath the makeup and prosthetics. But the photos of the Bombshell cast vs. the real people prove Theron isn't the only actor that will make you do a double take.

Bombshell tells the story of the sexual harassment allegations against former Fox News CEO Roger Ailes. In 2016, former Fox News anchor Gretchen Carlson sued Ailes, alleging she was fired because she refused his sexual advances. Ailes was then accused of sexual harassment by other women, including former Fox News' anchor Megyn Kelly. Ailes denied the allegations against him, but was forced to step down from his role. He died a year later when he fell and hit his head, as reported by the New York Times.

Theron and Nicole Kidman star in Bombshell as Kelly and Carlson, respectively, and are joined by Margot Robbie. The Australian actor plays Kayla Pospisil, a fictional composite character whose story is based on other women's claims against Ailes, as explained by Entertainment Weekly.

Obviously, Robbie is left off of the list below because her character isn't an actual person, but check out how Theron, Kidman, and more actors featured in the film compare to their real-life counterparts.

The actor spoke with EW about getting into the part, which included working with Oscar-winning makeup artist Kazu Hiro. "The prosthetics on the eyes were [especially] tricky," she said. "We were all cracking up because only one eye would blink, and it looked like I had a glass eye."

Kidman plays Carlson, who hosted Fox & Friends, as well as The Real Story with Gretchen Carlson while at Fox News. At a screening of the film in October, Kidman said that she didn't know much about Carlson before taking on the role, as reported by People. She added, "I would hope that through the course of telling this story people feel that they can speak up and be heard.”

Veteran John Lithgow transformed into Roger Ailes for the film. During a Q&A about the movie, Lithgow said (via IndieWire) that he was "skeptical" about all the prosthetics at first, but that changed. "That prosthesis, there are six pieces put together: two jowls, one huge double chin, a different nose, and two fat earlobes, and it blends so completely with my own fact," he said. "I would wrinkle my face and the wrinkles in the prosthetic would cohere with the wrinkles on my face. I don’t know how they do this magic.”

Alanna Ubach, who is known for Coco, Euphoria, Legally Blonde, and Girlfriends' Guide to Divorce, plays Jeanine Pirro, the host of Fox News' Justice with Judge Jeanine. In addition to being known as a fan of Donald Trump (and vice versa), Pirro made headlines earlier this year for making anti-Muslim comments in regards to Rep. Ilhan Omar.

In one of the trailer's for Bombshell, Bree Condon (The Young and the Restless, The Haves and the Have Nots) is shown in character as Kimberly Giulfoyle wearing a "Team Roger" T-shirt. It's unclear if those shirts were real, but Giufoyle did support Ailes, as reported by The Mercury News. Giufoyle previously hosted Fox News' The Five and is currently dating Donald Trump Jr.

Connie Britton takes on the role of Ailes' wife, Beth Ailes. As reported in Ailes' New York Times obituary, Beth was previously a program director at CNBC. They got married in 1998 and had one child.

Star Trek Into Darkness actor Alice Eve plays Ainsley Earhardt, a current co-host of Fox & Friends. At the time that the harassment allegations came out in 2016, Earhardt spoke out in support of Ailes to People magazine.

Abby Hunstman is a current co-host on The View and a former co-host of Fox & Friends. Like Earhardt, she spoke out in support of Ailes and Fox News to Bustle in 2016.

Lastly, we have Allison Janney as Susan Estrich. Estrich was Ailes' legal counsel, which came as a surprise to some as she had been known as a feminist. She told the Washington Post of the choice in 2016, "The man described by the media is simply not the man I know. I don’t think anyone in the business has done more to promote the careers of women than Roger."

More like this
Alicia Silverstone Revives Her 'Clueless' Character In This Super Bowl Commercial
By Jake Viswanath
How Andrea Riseborough Got Nominated — & Almost Disqualified For An Oscar
By Jake Viswanath
Austin Butler Recalls Lisa Marie Presley Showing Him Elvis’ Bedroom
By Jake Viswanath
Pamela Anderson’s Dating & Marriage History Could Be Its Own TV Series
By Jake Viswanath
Get Even More From Bustle — Sign Up For The Newsletter
From hair trends to relationship advice, our daily newsletter has everything you need to sound like a person who’s on TikTok, even if you aren’t.