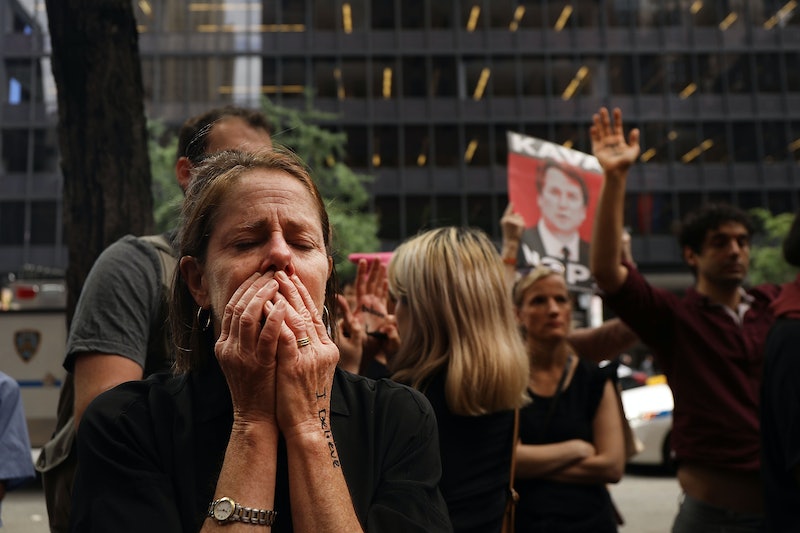 In one of the most high-stakes Congressional hearings in years, Dr. Christine Blasey Ford and Supreme Court nominee Brett Kavanaugh, who Ford has accused of sexually assaulting her, both testified in front of the Senate Judiciary Committee on Thursday. It was an emotionally-charged day, especially for survivors of sexual assault, and pictures from the Kavanaugh protest that took place outside the Capitol during the hearings illustrate how critical this historical moment is.

Ford alleges that Kavanaugh pinned her to a bed, groped her, tried to removed her clothes, and pressed his hand against her mouth when she tried to scream. Kavanaugh has denied her accusation, as well as other sexual misconduct allegations against him that surfaced in the week before Ford's testimony.

As the two were preparing to testify, anti-Kavanaugh protesters gathered outside of the U.S. Capitol to show their support for Ford and opposition to Republicans' dismissive reaction to her accusation. After holding a moment of silence for survivors of sexual assault, many of the demonstrators began chanting, "We believe Christine Ford, we believe Anita Hill," before marching to the Supreme Court itself and chanting, "No means no, Kavanaugh has got to go." According to USA Today, Capitol police arrested 59 of the protesters, ostensibly for blocking a street.

By and large, Republican senators have dismissed Ford's claims, casting doubt on her memory and, in some cases, her honesty. Sen. Lindsay Graham, a staunch Kavanaugh defender, accused her of participating in a "drive-by shooting" of Kavanaugh, while Sen. Orrin Hatch suggested that Ford was "mixed-up" in her recollection of what happened.

Ed Whelan, a Republican operative and former Bush administration official, argued in an extensive Twitter thread that Ford was misremembering the identity of the man who assaulted her.

Many of the protesters on Thursday had the phrase "believe women" or "I believe" written on their hands, clothing, or signs. Some of them put tape or their hands on their mouths — a reference to Ford's claim that Kavanaugh attempted to silence her screams by pressing his palm against her mouth. In her testimony, Ford said that this moment was "what terrified [her] the most, and has had the most lasting impact on [her] life."

Some of the protesters wore teal at the demonstration; this was a show of solidarity with Anita Hill, who wore the same color in 1991 when she testified during Clarence Thomas's confirmation hearings that he sexually harassed her. Thomas denied Hill's allegations and was confirmed despite her testimony. He now sits on the Supreme Court.

In addition to the protests in Washington D.C., solidarity demonstrations were held in other cities around the country.

Ford gave an emotional testimony during her time in front of the Senate, and explained the effect Kavanaugh's alleged assault had on her and why she didn't report it immediately.

"Brett's assault on me drastically altered my life," Ford said in her opening statement. "For a very long time, I was too afraid and ashamed to tell anyone these details. I did not want to tell my parents that I, at age 15, was in a house without any parents present, drinking beer with boys. I convinced myself that because Brett did not rape me, I should just move on and just pretend that it didn't happen. Over the years, I told very, very few friends that I had this traumatic experience."